If you’ve always wanted to cruise the Panama Canal, Holland America is ramping up their options.  Beginning in 2022 and continuing into 2023 the cruise line is sending four cruise ships on full and partial Panama Canal cruises.

With four ships slated for this special itinerary, choosing your Panama Canal cruise just got easier.

A Panama Canal cruise was on my cruise bucket list for many years.  Finally, just before the pandemic hit, I completed a full Panama Canal transit, from Fort Lauderdale to Los Angeles.  In short, it was spectacular.

Beginning in fall of 2022, Holland America’s Eurodam, Nieuw Amsterdam, Volendam and Zuiderdam will offer a total of seven full transit Panama Canal cruises.  The eight-hour daylight transit between the Atlantic and Pacific oceans is definitely part of the bucket-list cruise experience.

In those eight hours, you’ll cruise through what took 35 years to build.  Meanwhile, onboard enrichment lecturers will share the history and construction of the Panama Canal.  For me, it was important to attend these events just to satisfy my curiosity how the canal was built.

Holland America’s four ships will offer full transit, coast-to-coast cruises that range in length from 14 to 23 days.  The longer cruises begin or end further north in Seattle or Vancouver.

READ MORE:  Things to Do in Cartagena, Colombia on a Day in Port

During the cruise, port calls include stops in Central America and the Caribbean.  So you’re really combining a Panama Canal cruise with some of the less-visited Central America cruise ports.

Trying to decide on a full Panama Canal coast-to-coast transit or a partial transit round-trip from Florida?  Of course if time allows, the 14-to-23 days cruise is the bucket list itinerary.

But if you can’t get away for that much time or if budget is a consideration, Holland America has several excellent choices.  And you’ll still go through almost all of the Panama Canal, too.  Plus Caribbean ports, too.

READ NEXT:  How to Choose Your Panama Canal Cruise Itinerary

Combine a 10- or 11-day Caribbean cruise with a partial canal transit aboard Eurodam and Volendam roundtrip from Fort Lauderdale.  You’ll visit tropical ports on your way to Gatun Lake and still spend a day of scenic cruising throughout the canal.

Named “Best in the Panama Canal and Central America”

How Much Does a Holland America Panama Canal Cruise Cost?

Panama Canal cruise prices begin at $2,469 per person based on double occupancy on a 14-day sailing.  Prices include Holland America’s “Have it All” premium package.

This includes two shore excursions, a Signature Beverage Package, two nights specialty dining in Pinnacle Grill, Canaletto or Tamarind (depending on ship), and a Wi-Fi Surf Package throughout the cruise.

However, if the almost-all inclusive add-on isn’t for you, cruise-only standard fares start at $1,909 per person, double occupancy. Taxes, fees and port expenses are additional. 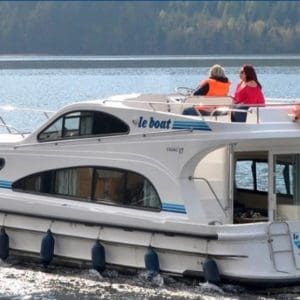