You’re finally going to plan that long-awaited Alaska cruise.  One question I’m often asked is, “do I need a passport  for an Alaska cruise?”  The answer is easy: yes.  And no.

Alaska cruises are different.  Your destination is America’s 49th state.  Why would you need a passport for an Alaska cruise?  Let’s break it down to the different cruises and itineraries.

Do I Need a Passport for an Alaska Cruise?

On a “closed-loop cruise” – one that begins and ends in a US port – technically you don’t need a passport book.  For example, a Caribbean cruise round-trip from Miami.

All you need for this type of cruise is a government-issued photo ID and a birth certificate with a raised seal.  But is that a smart decision?  IMO, no.  Here’s why…

If your ship breaks down in a foreign port or if you have a medical emergency, to fly home to the USA asap, you need a passport book for re-entry.  Plain and simple.

Without a passport, you’d have to get in contact with the local US embassy or consulate and apply for an emergency passport.  This can take days, especially if it happens over a weekend.

Cruises to Alaska from Seattle or San Francisco

Either north or southbound, unless the laws change, your ship will stop somewhere for a service call in Canada before returning to Seattle or San Francisco.  Still, you don’t need a passport.

But it’s always best to have an up-to-date passport that doesn’t expire within 6 months of your trip departure.  However, it isn’t mandatory to have a U.S. passport on this type of closed-loop cruise from the Lower 48 to Alaska and back.

Remember though, if an emergency should happen and you need to fly back to the U.S. from Canada, unless there’s some kind of work-around, you will need a U.S. passport to re-enter the United States.

Also, cruise lines could require that you have a passport, even for a closed-loop Alaska cruise from the Lower 48.  Be sure to follow your cruise line’s requirements and that you allow enough time to get a valid passport if needed.

When a cruise ship cruises the Inside Passage to Alaska departs from a US port, the ship must…MUST stop in a foreign-flagged port before returning to the US.  Why?

First of all, almost every large cruise ship that departs from a US port was built and flagged in a foreign country.  Cruise lines erroneously site the reason for stopping in for example, Vancouver or Ensenada, as the Jones Act of 1920.

This Act states that only vessels built, crewed and flagged in the US may carry cargo between US ports.  It was a protectionist Act aimed at preventing foreign-flagged ships from moving their goods between US ports.  But that’s not actually the reason.

RELATED:  Take the Alaska Marine Highway Instead of a Cruise Ship

Why Must Cruise Ships Stop in a Foreign Country?

The  Passenger Vessel Services Act of 1886 (46 U.S.C. 289) states that “No foreign vessels shall transport passengers between ports or places in the United States, either directly or by way of a foreign port.”  Done.  Archaic?  I’d say yes.

Since most of the cruise ships departing from U.S. ports are foreign-built, flagged and crewed, they have to include a foreign port call in all itineraries. That’s why even round-trip Hawai’i cruises leaving from Los Angeles or San Diego stop at Ensenada (Mexico) on their way back from the islands.

Cruises to Alaska from Vancouver, Canada

If your Alaska cruise  begins or ends in Vancouver, British Columbia, Canada, think about how you arrive and depart from Canada.  Unlike me, nearly everyone else flies into Vancouver.

If, like I do, you take Amtrak from Seattle, you will still need to show your passport book to the immigration police at the Canadian border.

RELATED:  How to Take an Amtrak Train from Seattle to Vancouver, Canada

Entering Canada by Land or Sea

Canadian law requires that all persons entering Canada carry both proof of citizenship and proof of identity.  As of this writing, a valid U.S. passport, passport card, or NEXUS card satisfies these requirements for U.S. citizens.  Children under 16 need only present proof of U.S. citizenship.

Leaving Canada by Air or Sea Back to the U.S.

When traveling by air from Canada back into the United States, U.S. citizens are required by U.S. law to present a U.S. passport book. There are a few exceptions to this rule.

A full list of documents that can be used at land and sea borders are provided on the U.S. Customs and Border Protection (CBP) website.

When You Don’t Need a Passport for an Alaska Cruise

Also, if you don’t care about being able to go home to the United States, you can enter Canada with an official birth certificate and photo ID.

Small Ship Alaska Cruises Could be an Exception

Let’s say you are planning a small ship cruise through Alaska’s Inside Passage.  Your flight is non-stop from Seattle to Juneau, Alaska where you’ll board your expedition ship.

Same for the return, say from Sitka to Seattle.  Technically, on a cruise exactly like this, you don’t need a U.S. passport.

But, if your cruise has a shore excursion planned that includes a motor coach ride into the Yukon, British Columbia, then once again, you will need a passport book to re-enter the United States.  If your expedition cruise includes this excursion, don’t pass up this trip.

Remember the Eagles song, “Hotel California“?  “You can check out any time you like, But you can never leave!” To paraphrase, without a passport book, you cannot re-enter the United States from Canada, unless you are on a closed-loop Alaska cruise from Seattle, San Francisco or anywhere in the Lower 48 and your cruise line and intended shore excursions into Canada do not require a passport.

What are you waiting for?  Get your passport book and start to plan your Alaska cruise.  Especially if Skagway is on the itinerary and you plan to ride aboard the White Pass & Yukon Railroad into Canada for the afternoon!

READ MORE:  Do I Need a Passport for a Caribbean Cruise? 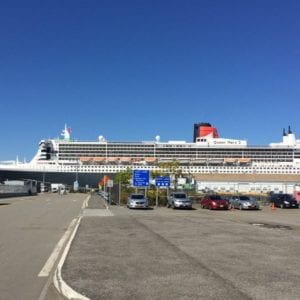