One thing is true about the shorter cruises; they’re usually done with older and oldest ships in a cruise line’s fleet.  Majesty of the Seas is one of those ships.

Royal Caribbean’s Majesty of the Seas has seen quite a bit of ocean.  Majesty of the Seas now sails seven-night cruises from New Orleans to  Key West, CocoCay (Perfect Day) and Nassau, Bahamas.  Following the ship’s recent refurbishment, I needed a new look at this old ship.  I sailed out of Port Canaveral, not New Orleans, as the ship just was repositioned to the Big Easy.  But nothing’s changed on board since I cruised Majesty, except the sailaway scenery.  In fact, cruising out of New Orleans is a unique experience in itself.

Since I live near Port Canaveral, it was easy to arrange for a ride to and from the port – parking is getting more and more expensive.  This alleviated the need to walk from the parking structure to the terminal, with a carry-on.  I didn’t check any luggage.  Embarkation from drop-off point to boarding the ship was quick and efficient.  I arrived near 2pm and found little to no crowds.  The welcome aboard crew was very helpful in directing guests to their staterooms.

I am happy to report that my first impression upon boarding the Majesty of the Seas was that this 25-year old ship looked good.  Because it was a Sunday – Thursday cruise, the demographics were a little different than a typical Friday – Sunday weekend getaway cruise; less kids and slightly older passengers.

Unfortunately, our corridor’s room attendant didn’t begin his shift until 3pm.  Plus, with a seemingly new luggage delivery system, everyone else’s luggage sat at the end of the corridor stacked on the trolleys until their room attendant clocked in to begin to sort through it all.  Their luggage arrived just after sailaway, so not too bad.  I only had a carry-on so the delay didn’t affect me.

My stateroom was “clean and fresh” and because I’m a Diamond Plus member, there were some toiletries in the bathroom.  The recent refurbishment added new bedding and flat screen TVs.  There was very little drawer space so I relied on mainly shelves for clothes.  That’s how it is on older ships.  The biggest issue was using the in-room safe. Apparently it’s located on the lowest possible shelf level and to open it meant sitting on the floor and using my phone’s flashlight to see inside.

Dining room service was attentive and the menu offered a good selection and…great desserts. On the down side, my tablemates all thought that there was virtually no atmosphere or oomph to the decor. Because of the low ceiling (again, an older ship feature) the dining room was noisy and felt over-crowded.  Dress codes were not enforced in the main dining room at dinner, so jeans, shorts and baseball caps were common. But hey, great desserts!

Following a recent refurbishment, Majesty of the Seas now has Johnny Rocket’s hamburger and milkshake diner plus Latte-tudes cappuccino and coffee bar.

Even on boarding day, there were hardly any lines at the buffet. Throughout the cruise, everyone I spoke with agreed that the Lido food was good and there was a nice variety to choose, in every course.  They also agreed that it was very clean.

Despite it being very noisy and a lot of “homesteaders” on the first day staking out their chairs, there still seemed to be available lounge chairs even at sailaway time.  On port day, the ship and the pool area were empty.  The outdoor movie screen was a nice addition.

The main production numbers with singers and dancers scored an “Excellent” rating.  I thought the other shows were very good, too.  Since I don’t make a habit of sitting through the evening shows, I had to do it for this review.  I’m glad I did.

Currently, Key West, Nassau and CocoCay.  I opted to stay onboard and enjoy the afternoons when in port at Nassau and CocoCay.  With nearly the entire ship gone ashore and several massive ships already docked, you can bet that there were some crowds in downtown Nassau. Shore excursions for Nassau are plentiful while CocoCay makes for a fabulous beach day.

Deviating from my usual habit, I opted for early walk-off which began at 7am (time can vary depending upon when the ship is cleared to debark passengers.) Early walk-off was speedy as was immigration.  There was a bit of confusion looking for my ride, but nothing remarkable.

Royal Caribbean’s Majesty of the Seas makes for a very nice three- or four-day getaway.  I’d do it again without hesitation.

Read next:  Best Places to See Sailaway at Port Canaveral 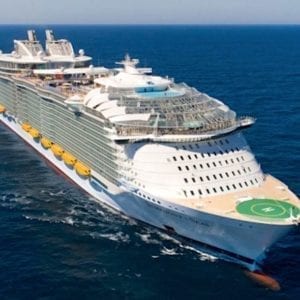 Royal Caribbean Takes Delivery of Symphony of the Seas