Practice what I preach.

I should have followed my own advice.  With a Europe-bound ship to catch and no alternative for a missed departure, I had to get to the cruise port on time.

Solo travel has its own challenges.  One of which is getting to a cruise port, especially if it’s too far to use a taxi/Uber/Lyft or ask someone to drive you there.

When it became time for me, a solo traveler, to figure out how get to Fort Lauderdale to board Holland America’s Koningsdam for a transatlantic crossing to Rome, I needed a plan.  Luckily, I had two of them.  I hadn’t thought far enough into this for Plan 3.

Rent a car at home and the morning of the cruise, drive to Fort Lauderdale.  Return the car at the airport and get a taxi to the port.  Sounded simple.

Rent a car, drive to Orlando, return the rental and get a ride to the Amtrak station for a train to Fort Lauderdale.  From the Fort Lauderdale train station, take a taxi to a hotel.  It had to be a hotel that provided a shuttle to the cruise port in the morning.

What I chose to do

While Plan 1 was the most economical, it was also the most stressful.  Ugh!

The drive from Florida’s Space Coast of Florida (think Cape Canaveral and Cocoa Beach) to Fort Lauderdale and Port Everglades is usually about two and one-half hours.  I don’t drive like a maniac – I simply keep up with traffic.

Decision made, I reserved a rental car to drive to Fort Lauderdale.  I would return the car at the airport (no dropoff fee) and take a taxi to get to the cruise port and my awaiting ship.

The drive was almost pleasant, were it not for the out-of-state drivers who zoom past at 95 mph hoping to get to Miami Beach 15 minutes before everyone else.

Almost totally packed the night before, the morning of departure went pretty smooth.  All that was left was a newsletter to draft, files and my laptop to pack and of course, gather up all my makeup and toiletries.  My well-planned 10:30am departure became 11:15am. Still plenty of time for the two and one-half hour drive, drop the car at the airport and get into a taxi to the port, for the 5pm sailaway.

Or so I thought.

Traffic moved at a good 78 mph clip.  I anticipated a 1:40pm arrival at the airport and I guessed maybe another half-hour to drop off the car and get to the port.  What I didn’t anticipate was a flipped car off to the side of the road just south of Pompano, only 20 minutes from the Fort Lauderdale Airport exit.

All five southbound lanes were at a standstill.  I could almost hear the dashboard clock ticking away the minutes.  On top of this delay, I needed to find a gas station near the airport exit or I’d be charged $9.99 per gallon for the ⅓ tank of gas that was used.

“Hey Siri,” I yelled into my phone.  “Where’s the nearest gas station?”

When we finally inched past the accident zone some 30 minutes later, my mission to find the nearest gas station was underway.  And way past the airport, too.

As Siri said to stay in the left lane, I drove past two thriving gas stations on my right.  But turn left I did, and ½ mile further I found where I was being directed.

It was nearly 2:15pm and I still had to get back to the airport, return the car and get to the port.  That’s when a friend texted me to say that the ship was departing at 4pm not 5pm.

Note to self:  Always check ship departure time a day before you make plans to leave home.

I haven’t been in an airport parking lot in over two decades, except to pick up my daughter at Orlando International.  And that was only to drive through the arrival lanes.

As I followed the signs for Rental Return, I checked the clock.  2:28pm.

Luggage out and ready to roll, I asked the rental agent where to find a taxi.  No problem, he assured me. I memorized a laundry list of directions only to find that I needed to go left, not right, to get to the elevator. The exit was on Level 2 not Level 1 as he said.

Now I better understand why some people say they don’t mind the actual flying…it’s the airport chaos that they can’t stand.  It was a 15 minute speed walk, a people conveyor belt, a skybridge and an escalator. Finally I was outside. Luckily I spotted the taxi rank though it was nearly unmarked.

2:51pm Luggage reloaded, we were on the way to the port.

You know you’re late when there’s no one else dropping off their suitcases to the porters.  Easy peasy breeze-through to check in and embarkation. From terminal entrance to my stateroom in 12 minutes. Unfortunately, the photographers were long gone so no goofy boarding photo to capture my frazzled and frantic appearance.

Onboard with 20 minutes to spare until they would start to haul in the gangway.

For subsequent departures from Fort Lauderdale to Europe, I’m going to follow the same advice that I’ve given to everyone else: Arrive at the port city the day before departure.  Unless you thrive on stress and panic, plan to begin your trip one day earlier.

Yes, I have travel insurance.  It’s a yearly plan and the Missed Connections coverage was only $500 for the entire year. Not nearly enough to cover the cost of finding another transatlantic-bound ship at the last minute. Maybe a one-way plane ticket…but that’s not going to happen.

An Amtrak coach ticket from Orlando to Fort Lauderdale is about $50.  Taxi and hotel with breakfast and shuttle to port maybe another $100 or so.  My rental car was $71, gas $18 and taxi with tip, $25.  Doing the math, the few dollars saved isn’t worth the stress. Arriving at the ship relaxed and ready for a new adventure…definitely worth the slightly extra price.

At dinner last night I met a couple from my home town.  They drove down the day before and stayed at the Crown Plaza in Fort Lauderdale.  The hotel also has a Hertz car rental on site so there’s no need to haul over to the airport and do all that.  Plus, complimentary breakfast and a shuttle to the port.  That’s my plan for next time.

Today is our second sea day en route with our first port of call in the Azores in another five days.  More on my Koningsdam transatlantic crossing and four weeks through Europe to follow.

Read next:  12 Things I Like About Holland America Koningsdam 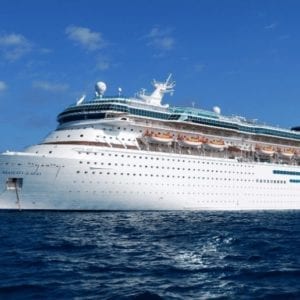