Symphony of the Seas is the fourth in a series of Oasis-class cruise ships.  With this new ship, Royal Caribbean added some changes and upgrades not built on the three previous ships.  At maximum capacity, the Symphony can accommodate 6,680 passengers based on triple and quad occupancy. There will be 28 more staterooms with balconies on the new ship than the other Oasis-class ships, too.

Royal Caribbean is reviving their popular Royal Theater production, “Hairspray” in addition to their amazing and original show, “Flight.”

Studio B will showcase a new time-travel adventure. A high-tech ice-skating show,“1977” will bring guests to London on the eve of the Queen’s Silver Jubilee when her Crown Jewels are stolen in the heist of the century.

For thrilling live-action adventure at sea, guests can gear up for an epic glow-in-the-dark game of laser tag.

Experience the new Puzzle Break experience on Symphony, where teams race against the clock and to work together toward a mutual goal: escape the submarine-themed room before time runs out.

High Tech on the High Seas

Guests will check-in via Royal Caribbean’s new mobile app and seamlessly upload their security “selfie” to create their onboard account before they leave home. When they arrive, guests will go through a security screening and then head straight to their stateroom, where their key will be ready and waiting.  Symphony will also feature “VOOM” – the fastest internet at sea, state-of-the-art wayfinding and virtual balconies.

Symphony of the Seas first cruise is March 31, round-trip from Barcelona on a five-night cruise to Naples and Rome.  The world’s largest cruise ship will then reposition to Miami on a 12-night transatlantic crossing on October 28, 2018.

Read more:  Symphony of the Seas explained in a fun infographic! 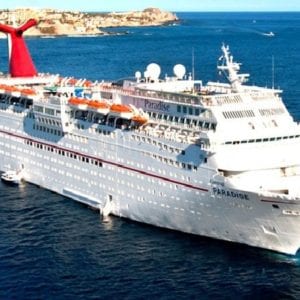