Budapest – Top Ten Places You Should Definitely Try to Visit 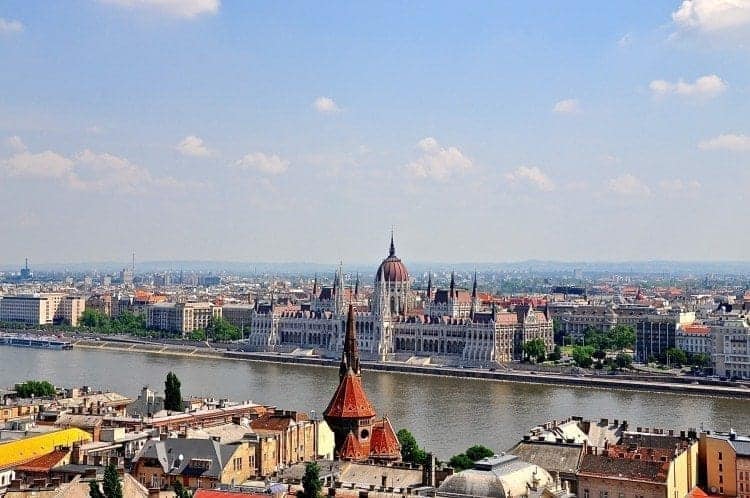 From bubbling thermal baths to eerie reminders of Hungary’s Nazi and Communist past, you’ll find incredibly diverse places to visit in Budapest.

This was my fourth visit to Budapest on a Danube river cruise.  Each time, my river ship has docked in a different location so I’ve had to learn  to get around from various vantage points.

Budapest is a bustling metropolis, once two separate cities separated by the Danube. Buda has the hills while Pest (sounds like Pesht) is the flat, cosmopolitan side.  Confusing? Think of the “B” in Buda as two hills.  Works for me.

A very walkable city on both sides, almost all the important places to visit in Budapest can be reached on foot.  If you’re going to do a self-guided walking tour, it’s important to arrive into Budapest with a game plan and a good map.

Whether you have only one day or an entire week, here are my choices for top 10 not-to-be-missed places to visit in Budapest. 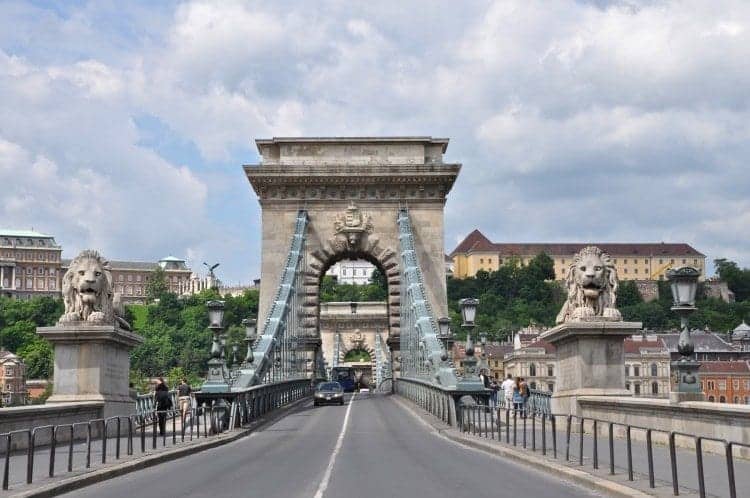 Completed in 1849, the Chain Bridge was the first permanent bridge across the Danube and link the two cities of Buda and Pest. Across this suspension bridge on the Buda side is the funicular to go to the top of Castle Hill.  At sunset, the Chain Bridge is illuminated by alternating colors of the Hungarian flag just before the entire bridge is bathed in flood lights.

Anytime is a fabulous time to walk across the Danube on this beautiful suspension bridge. I don’t recommend standing in the middle of the busy street  to take this photo, though! 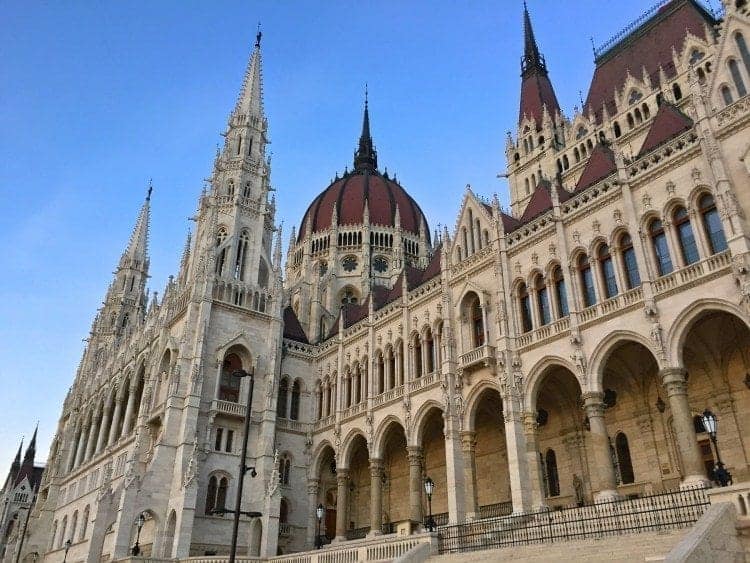 Located along the Danube promenade on the Pest side is this enormous Neo-Gothic designed building was completed in 1802. It’s also the third largest parliament building in the world.  If you have the time, tours are available (they’re short, only about 45 minutes and given when Parliament isn’t in session) and you can purchase tickets online or at the ticket window.  Included on the tour is a viewing of the Hungarian Crown Jewels and the main rooms and hallway. 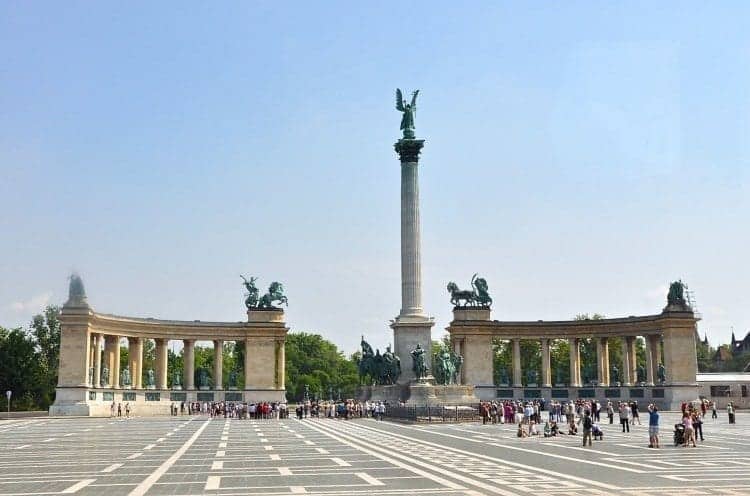 Constructed in 1896, Heroes’ Square was dedicated on the 1,000th anniversary of Hungary.  Not shown in the photo are the Museum of Fine Arts on the left and the Hall of Art on the right.  The tall pillar in the center commemorates the 1,000 year old history of the Magyars (original tribes that settled today’s Hungary) and has the statue of the Archangel Gabriel at the top. 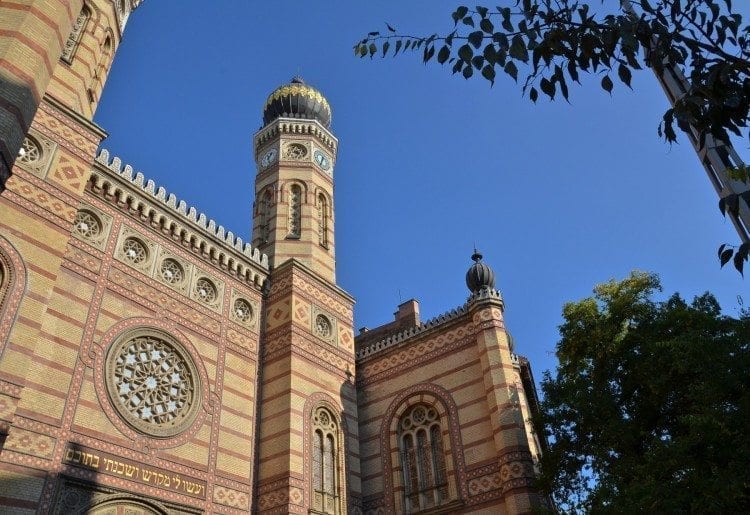 Completed in 1859, this is the largest synagogue in all of Europe and almost in the world.  During WWII, the Nazis took over the synagogue and used it as a horse stable and communications center. On the grounds is the fascinating Jewish Museum, Heroes’ Temple and a Jewish Cemetery.  The small courtyard cemetery has over 2,000 people buried there in layers, many of whom were either shot and killed nearby or died in the ghetto during the winter of 1944-45.  Tours are available and highly recommended. 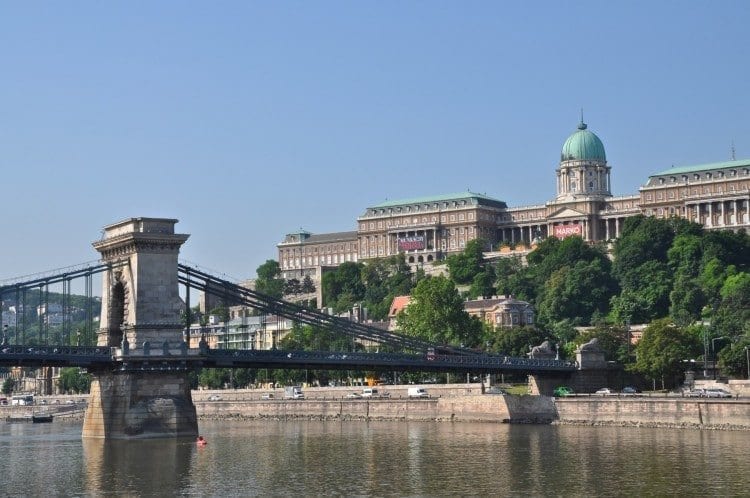 Towering over the Danube, Buda Castle (Buda Palace) has seen its share of owners and changes since completion in 1356. The massive palace saw a remodeling every century or so by whomever was the current royal owner. Part of the complex contains the National Library, National Gallery, the Budapest History Museum and other smaller museums. 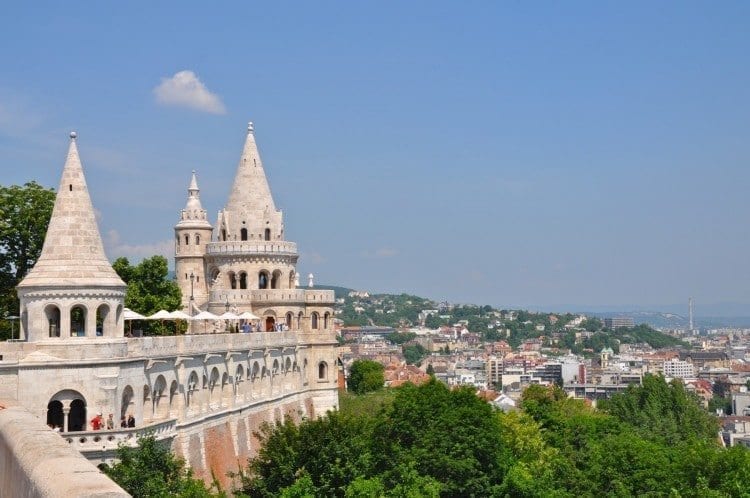 Another relatively new commemorative building, slightly 100 years old, it provides the best lookout point across the Danube. Centuries ago, the local fishmarket stood nearby.  Take the funicular from the Chain Bridge or walk up if you prefer.  For a small fee, you can walk along the top level, stand in the turrets admire the incredible view.  Bring your camera for the best shots of Chain Bridge, Parliament Building and Pest.

7. Shoes on the Danube 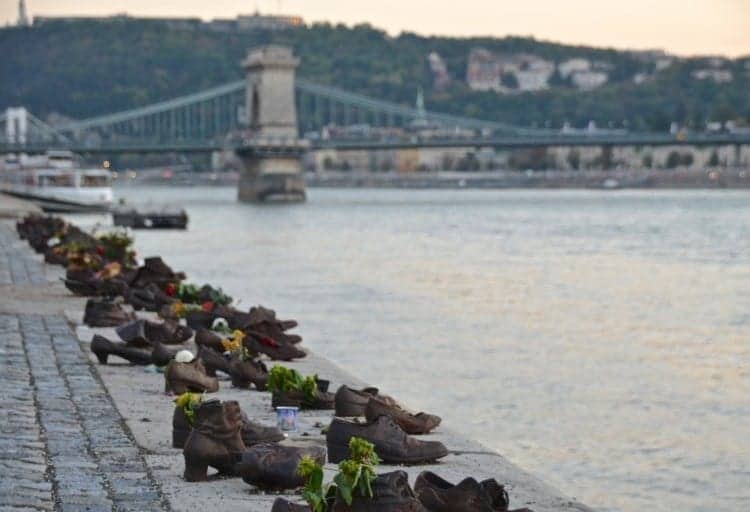 Shoes on the Danube Promenade, created in 2005, is very moving art installation set in cement along the river bank.  The sculptor, Gyula Pauer, created 60 pairs of iron shoes in memorial to the Hungarian Jews who perished on the river bank in 1944-45.

The Arrow Cross militia rounded up Jewish men, women and children in Budapest and forced them to stand on the river bank. The people were ordered to remove their shoes and stand at the river’s edge.  Then they were shot, fell into the river and drifted away.  Shoes were a valuable commodity during the war, so the Arrow Cross militiamen would gather up the shoes left behind, and either wear or sell them. 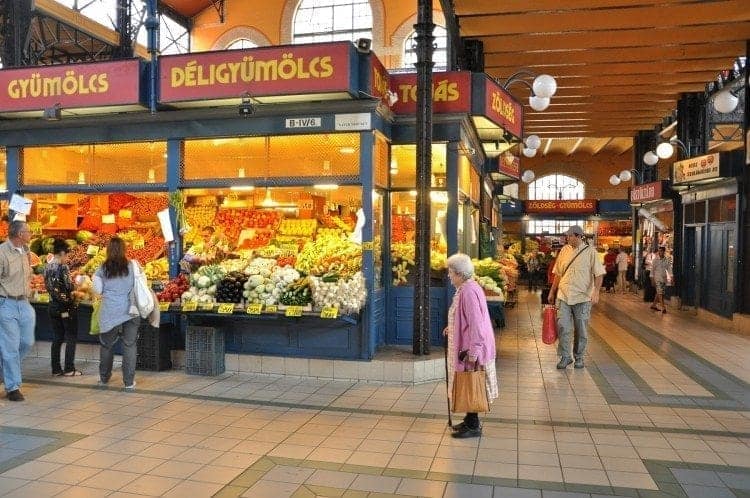 No visit to Budapest is complete with a stop at the enormous two-story Central Market Hall.  Opened in 1897, the main floor of the indoor market sells an incredible selection of all sorts of meats, sausages, vegetables, cheeses and of course, paprika.  The second floor has vendors selling clothing, traditional Hungarian embroidered blouses, souvenirs and a few fast food stands. Head down to the basement for a look at the fishmongers, a grocery story and butcher shops.  It’s almost impossible to leave here without sampling the food or buying a souvenir bottle of Hungary’s famous Tokaji wine. 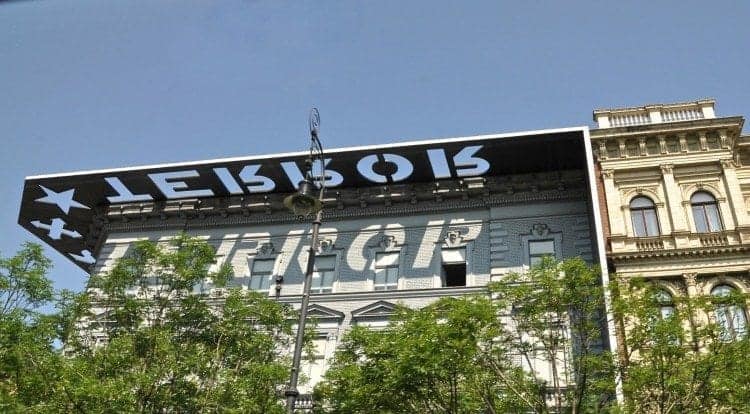 Another somber reminder of the atrocities of World War II is the House of Terror Museum.  The building was the former headquarters of the Nazi Party in 1940 and the basement used as a prison.  When Communism came into play, Hungary’s State Security (equivalent to Russia’s KGB) took over the building.  Hundreds and hundreds of people were tortured and imprisoned here.  The exhibits in the museum are a testament to Budapest’s recent violent past when both Nazi and Communist secret police ruled the streets.

I’ve never allowed myself time to relax in Budapest.  Next visit I’m going to go straight away, towel and bathing suit in hand, to the Gellért Hotel atop Gellért Hill and indulge in the thermal waters of Gellért Spa.  In use since the 15th century, the current art deco hotel and baths opened in 1918.  What’s in the water? According to their brochure, the soothing thermal spring waters contain magnesium, calcium, sulphate-chloride, hydrogen-carbonate, fluoride ions, and sodium.  There’s even an inhalatorium said to relieve symptoms asthma and bronchitis.  Open every day from 6a.m. til 8p.m.

If your river cruise begins or ends in Budapest, be sure to add at least two full days to your itinerary.  There’s so much to see and do in Budapest in a fairly small area, plus sample the local food and wine.  If a culinary tour is of interest, Viator offers a small group food and wine tasting tour.

Click here to read more about my Danube, Main and Rhine Grand European Tour river cruise aboard the Viking Lif and eventually, the Viking Skadi.

AmaWaterways Chef’s Table Gets a New, Enhanced Menu
How to Take the Train to Budapest for a Danube River Cruise