Most people fly into Budapest, Hungary to begin their Viking Grand European river cruise.  Not me.  I arrived the slow way…by ship and train.

One transatlantic crossing, four hotels, four countries and nine trains.  Finally, I arrived at Budapest, a stunning yet austere city on the Danube river.

Even though this was my fourth visit to Budapest, I had always arrived there while on a river cruise, never by train. The reservation agent at RailEurope advised me to arrive into Keleti station. Good advice.  Don’t use the “other” train station.

Little did I know that Keleti train station was once one of Europe’s most beautiful structures.  It’s been carefully restored and reflects much of its original grandeur of 1884.

Since I had never arrived into Keleti, I asked Viking River to arrange for a driver to meet me at the station.  Yes, I’d have to pay for it, but traveling alone and in a new city, this was my comfort zone.

I didn’t even have to walk to the end of the long platform when I saw the driver holding a small piece of white paper with my name on it.  In five minutes, we were in the taxi, en route to Viking Lif.

Weary but excited, I looked forward to boarding Viking Lif, one of their many “Longships.” It would be nice to unpack for a fortnight.

After all that travel, pack and unpack, I was definitely ready for two lazy weeks on this Viking River cruise.  With my 4:30pm arrival in mid-October, dusk arrived early in Budapest. just shortly after I did.  By 5pm, I was in my stateroom, the sun was setting and I began to settle into my new surroundings.

First of course, I inspected the bathroom, happy to find an assortment of L’Occitane toiletries, a spacious shower and plenty of countertop space.

Then, a quick peek outside to watch the sunset over the Buda side of the city.

With not much time to spare, I was back inside for our first passenger get-together. The welcome aboard briefing quickly covered the entire Grand European river cruise itinerary.  Promptly at 7:00PM, we were dismissed because it was time for dinner.

Dinner was fun…sort of like the first day at overnight camp.  “Where are you from?”  “What cabin are you in?”  “You’re traveling solo???” The usual suspect questions.  It’s good getting to know with whom you’ll spend the next two weeks.

After dinner, I had to step off the ship and do a little walking.  Docked at the Chain Bridge in the heart of Budapest, a walk across the bridge was a must.

Leaving the ship at night, I was of course a bit concerned.  To my surprise, there were tons of people out for a late-night stroll.  Younger locals walked arm in arm while older couples strolled with arms entwined.

I even spotted a few folks from Viking Lif.  My trepidation was put to rest as I walked back and forth across the Chain bridge at least twice in each direction.  In addition, the amount of lights on and near the bridge almost struck a daylight resemblance.

Budapest at night was a totally different experience than my previous daytime explorations.

Like everyone else, we were all pretty exhausted from our long travel day.  The morning would bring my first Viking River city tour: a trip to the largest synagogue in Europe, the Dohány Street Synagogue.

WHAT TO DO IN BUDAPEST ON YOUR OWN: Top 10 places to visit in Budapest, especially if you have a pre- or post-Danube river cruise stay.

Traveling solo on a river cruise, dinnertime can be awkward as there are usually mostly couples and the tables are for even numbers. I’ve learned over the years to arrive early and stake out a table.  Then it’s up to whomever wants to join me to sit there.  It’s a lot better than my wandering around looking for one empty seat and continually having to ask people if I could join them. 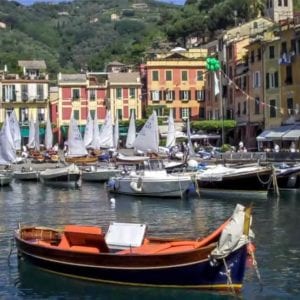 What to Do in Portofino, Italy in Only One Cruise Day