Cunard has announced the name of their new cruise ship; Queen Anne.  It was way back on October 11, 2019 at the Fincantieri shipyard in Italy, the first steel was cut for the yet-unnamed fourth Cunard ship.

Today, Cunard announced the new ship’s name after an extended delay in construction due to the ongoing pandemic.  Queen Anne will be the 249th ship in Cunard’s fleet that dates back to 1840.

As the fourth ship in a line of celebrated queens, Queen Anne will take her place next to Queen Mary 2, Queen Victoria and Queen Elizabeth.  When the new ship debuts, it will be the first time since 1999 that Cunard will have four ships in operation.

Cunard really had to reach back in time when deciding on the name for this ship.  The last of the Stuart monarchs, Queen Anne reigned from 1702 – 1714 and was responsible for bringing Scotland into the fold and creating a Great Britain.

British historian, author and television presenter, Kate Williams, assisted in the detailed research to settle on the name.

Kate says, ‘It is so exciting that the fourth ship of the fleet will be named after Queen Anne. She has a fascinating tale to tell – one of queenship, unity of developing constitutional monarchy, a golden age of the arts. She was an inspiring woman, wildly popular with her people. She should be celebrated. This new ship in the Cunard fleet is the perfect way to do it!’

What Will the New Queen Anne Ship Look Like

From the silhouette in the photo and knowing that Cunard is part of the Carnival Corp. family, Queen Anne looks very much like a Holland America Pinnacle-class ship.  This includes Koningsdam, Nieuw Statendam and Rotterdam.

In the artist rendering of Queen Anne (below), the space looks just like B.B. King’s Blues Club on the three Pinnacle-class HAL ships.

While nothing has yet to be revealed regarding the design of the new ship, Cunard did drop a few hints.

In their new ship press release, the line said, “The décor will reveal bold color tones and showcase a striking aesthetic, while in keeping with the renowned timeless Cunard sophistication.”

Carnival UK President, Sture Myrmell commented, “I am absolutely delighted to welcome Queen Anne, the fourth ship to Cunard’s fleet. This marks a very special moment in Cunard’s 182-year history and showcases Cunard’s exciting global plans for the future, allowing even more guests around the world to set sail with Cunard.”

He continues, “With design inspired by the past and set for the future, Queen Anne is the perfect way for our guests to rediscover the joy of exploration and travel again. We look forward to sharing more details in the coming weeks and months.”

Queen Anne’s inaugural season departures will go on sale in May.  The ship’s first cruises are scheduled for early May, 2024.  More details will be announced as they become available.

As a devoted Cunarder (that’s what repeat passengers are nicknamed), I’m super excited to see a fourth ship added to the Cunard fleet.  While to me, nothing can compare to a transatlantic crossing aboard Queen Mary 2, I look forward to experiencing the new Cunard Queen Anne wherever she may sail.

For more travel inspiration, check out these articles: 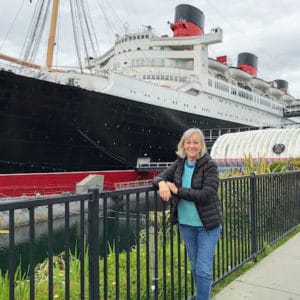