Almost every transatlantic crossing, except Queen Mary 2, (what I’ve named the “Atlantic Express”) pays a call at Ponta Delgada, on the island of Saõ Miguel, in the Azores.

More times than not, I hear people asking the ship’s shore excursion desk what are the best things to do in Ponta Delgada.

Here’s what I recommend to do in Ponta Delgada while visiting this middle of nowhere island!

While cruise lines constantly try to devise new and exciting shore excursions, it can seem pretty limited at first glance.  An island in the middle of nowhere of which most people aren’t familiar.  Surprisingly, there is actually quite a bit to do in Ponta Delgada.

Best Things to Do in Ponta Delgada, Azores

There’s a lot to see, taste and do in Ponta Delgada even from right where you dock.  If you have mobility concerns, there’s a elevator to get from the embarkation level to the plaza and shops level.

All the restaurants offer free wifi with a meal.  Great place to catch up with email and FaceTime.  In addition to grabbing lunch, there’s a pharmacy, souvenir shops and clothing stores.

Walk a little ways past the port.  Then cross the boulevard and climb up the narrow street to the cathedral.  This is an easy uphill stroll to do in Ponta Delgada while the rest of the island is very hilly. Nice spot just to sit and relax and look out at the harbor.

If you decide to take a bus tour and head out into the verdant countryside, you will see some spectacular scenery.  In the spring, colorful red and violet azaleas, yellow and deep purple-colored pansies are in bloom all around.

Where are the famous Hot Springs in Ponta Delgada?

First stop on your island tour might be to Caldeira Velha, a boiling hot sulphur spring.  Watch your step.  Seriously.  Innocuous little puddles are actually small boiling cauldrons.  Avoid those at all times.  Saõ Miguel is bursting with incredible natural wonders.  Definitely, not what you’d expect to do in Ponta Delgada.  Or see!

Back on the bus.  Another beautiful drive at dizzying heights.  I had to close my eyes as we climbed higher and higher weaving along  narrow switchbacks.  If there was a guard rail, I couldn’t see it from the bus window.

When you finally reach this point, you’ll forget about the cliff-hugging road to get here.  This is highest lake on the island; the crystal blue water of magnificent Lagoa do Fogo, (Fire Lake).

Set in the crater of an extinct volcano, the lake was formed after an eruption in 1563.  Thus the name Fire Lake.  The lake is slightly less than 100′ deep but extends nearly two-miles across.  We were so lucky to have sunshine up here.  At this elevation, fog and mist are the rule, not the exception.

Another interesting, and tasty, place to visit is the Arruda Pineapple Plantation!  Yes…pineapples!

Believe it or not, despite the pervasive fog and endless mist, Saõ Miguel is known for its pineapples! Go figure.  Weather in the Azores is nothing like Hawai’i where you’d expect to find the best pineapples.  But wait til you try one of these.

You’ll be handed a pamphlet about pineapple growing and go on a short tour of the greenhouse (a very short tour!) with an even shorter explanation on growing pineapples in the Azores.  Apparently it has to do with the volcanic soil, similar to the abundance of lush lemon trees in Sicily under the gaze of Mt. Etna, I’d guess.

It’s a quirky little tour, but worth a visit.  Be sure to buy a little souvenir bottle of pineapple liqueur to bring home.

Time to head back into town.  Take note of this three-arch structure.  It’s the threshold to Ponta Delgada, the Portas de Cidades.

Built in 1753, these were once the official Doors of the City of Ponta Delgada and located on the waterfront. The iconic structure was moved to Gonçalo Velho Cabral Square in 1952 when this area was developed.

Time for a late lunch.  Or an early dinner if your ship is docked through the evening.  I walked to Restaurante Adega Regional from the harbor.

No reservations needed, especially at this early dinner time.  First up, a bottle of chilled Azorean wine.  Along with pineapple plantations, the Azores have become a prominent wine producer.

Vineyards thrive in the volcanic soil as well as from the ever-present warming winds and high humidity caused by the Gulf Stream.

White wines from the Azores are made primarily from Arinto grapes.  Smaller quantities are produced using Verdelho and Terrantez do Pico grapes.  The Verdelho that I had was semi-sweet and went very well with my dinner, and especially with the cheese.

From wondering what in the heck to do, to realizing that your day went by in a blink.  If your ship leaves the island before sunset, head out on deck for sailaway.  The coastline of this volcanic beauty of an island is worth battling the wind to get a good photo.

I’m already looking forward to my return.  Now that I know the best things to do in Ponta Delgada, I can head out in search of more adventures in the Azores. 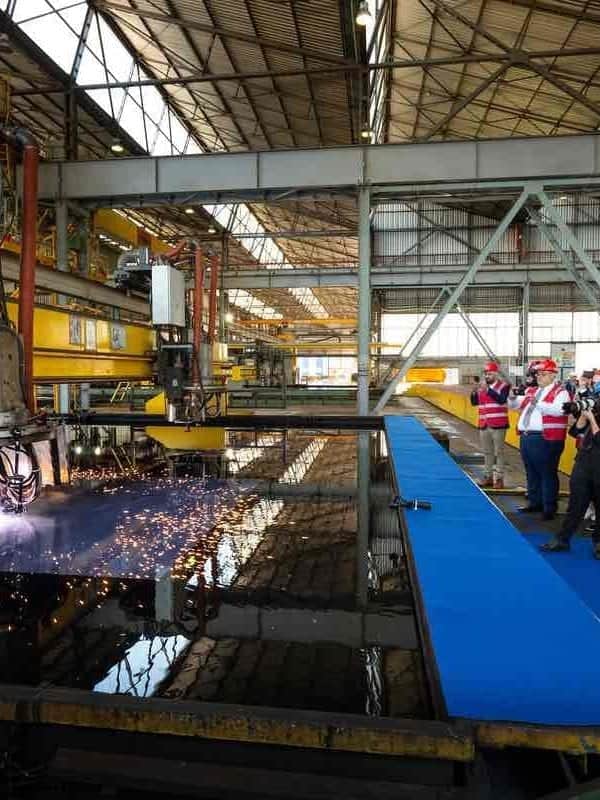