Transatlantic dining aboard cruise ships is a little weird. It’s due to the gradual five-hour time changes between New York and England.  With two Main Dining Room seatings for dinner on Queen Mary 2, at some point you’ll be eating dinner really late or really early, according to your body clock.

On a westbound transatlantic crossing, dining gets sort of mixed up.  Here’s why.

There’s sort of a rule of thumb when it comes to fixed dining times. Families and older folks tend to book the early seating, usually around 6pm. Europeans and younger (under 75) seem to opt for second, or late seating that begins around 8:30pm.  Figuring out your dining time for Queen Mary 2 Britannia Dining Room is easy with a little insider info.

With a five-hour time change as you cruise from east to west, of the seven nights crossing, five nights will require that the clocks be set back an hour.  This is usually done overnight, around 2:00am.

Nothing noticeable for the first day. But by the third time change, suddenly your 8:30pm dinner according to your body clock, is at 5:30pm.  And so on until you reach New York and your internal clock is reset.

The same can happen to your sleep patterns too.  Suddenly you’re waking up at 4:00am, until you remember that you’ve set your clocks back yet again.

That’s why I choose late seating on a westbound Queen Mary 2 transatlantic.  From body clock adjustment to a less crowded dining room and sometimes, a livelier and younger group of diners.

Keep in mind that as more and more ships eliminate fixed seating in lieu of more alternative dining options and dinner-when-you-want-to-eat choices, the issue of choosing a fixed time will become less frequent.  But tradition persists on this classic oceanliner.

By the end of my two months traipsing through Europe, once I’m onboard, I’m ready to relax, reflect and forget formalities.  Despite this, I always request to be seated with solo travelers at the largest table.  Almost always, I meet interesting people from various walks of life and from a wide age demographic.

But there is one horror that I dread; being seated at a six-seated table alongside people with whom I have absolutely nothing in common.  That’s what happened on one particular crossing.  Even though I was sure that the three people at my table were quite lovely, from the first “hello” I couldn’t understand them.

Months ago I had requested a table for eight to ten people, all solo passengers.  As I was led to this particular table, the first thing I noticed was that it was for only six people.  Three were seated.  There was one couple from England and a woman who was either Dutch or German. Couldn’t quite decipher. All had very heavy accents and it was clear that they were not communicating with each other. I’m sure each was a very nice person but I wasn’t about to work at conversation through dinner for an entire week.

Read more:  How to Get to Queen Mary 2 from Amsterdam by Train

Plus, there was a noticeable vibration on the upper balcony where we were seated.  Even the water in the water glasses jiggled.   With a very polite, “Excuse me”, I was able to use that as my reason to bail and bolt to the Maitre ‘d stand.

I rarely ask to change an assigned dining table.  But this time I did. I asked for a solo table. I should have known full-well that “solo table” would be interpreted as a table a solo passenger; a table meant for two people.  As I was led to my new table, it was indeed solo…at an empty round table for six people. Back to the Maitre ‘d.

This time, I was led to a table for two (so far so good) except that it was literally two inches apart from another table for two.  This would be fine if I was a “two” but as a solo, it’s extremely awkward for me to sit so close to another couple.

Back to the Maitre ‘d.  Would three be a charm?

This third time, I clarified that I wanted to sit alone and was led to an empty four-top.  All for myself. I was ecstatic. No one’s conversation to listen to or an awkward proximity to others.  And to make this relocation even better, Satya the waiter and I remembered each other from past crossings.  Three was indeed a charm.

After the dust settled, I felt empowered.  Three uncomfortable Queen Mary 2 Britannia dining room situations were happily resolved and all it took was for me to speak up for myself.  My mom would have been proud.

Once again I decided to try and keep a vegetarian regiment for the next six days.  It worked great tonight. I ordered a kind of grilled stack of veggies. In the photo here it looks more like a bagel sandwich but it was a grilled onion on top of various vegetables.  All nicely grilled, the stack included a slice of eggplant, zucchini, tomato, yellow squash, red and green peppers. Perfection.

Not much for me after dinner.  I wandered, tired and aimless, through various shops and lounges. We were going to set the clocks back that night, so I knew I’d have the option to get an extra hour of sleep. Close to my 10,000 step goal, I did a couple of hall laps, exceeded my step goal and called it a night.

At 3am, we passed just south of Bishop Rock, the nautical mark for leaving the English Channel and the official entrance to the North Atlantic.

Our transatlantic crossing aboard Queen Mary 2 had officially begun.  And I had conquered seating in the Main Dining Room without embarrassment. 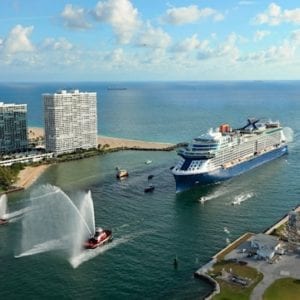