Under construction at Fincantieri Shipyard in Montefalcone, Italy, Sky Princess left the ship yard for its sea trials. Once out at sea, the ship underwent tests for propulsion, maneuverability and navigation equipment.

After six days of intense sea trials, Sky Princess returned to the shipyard for finishing touches to be applied in time for the ship’s first actual voyage on October 20, 2019.  Sky Princess will depart from Athens on a seven-day Mediterranean and Adriatic cruise to Barcelona.

Following a fall season in the Med, the 3,660-passenger Sky Princess will head across the Atlantic to Ft. Lauderdale in time for its December 2, 2019 debut. From Ft. Lauderdale, the ship will spend the winter sailing Caribbean cruises.

Sky Princess, fourth in Princess Cruises’ Royal class of ships, will have many of the features of sister ships Regal Princess, Royal Princess and Majestic Princess.

The ship will have two original venues; Phantom Bridge escape room and Take 5, the only jazz theater at sea.  Also being added is the OceanMedallion™, a wearable device that gives guests keyless entry to their staterooms, on-demand food and drinks, interactive gaming, plus it can be used on back-to-back cruises.

Look for more new Princess Cruises ships to include a June 2020 debut of Enchanted Princess and three more ships launching in 2021, 2023, and 2025.  A lot of sea trials coming up in the next five years. 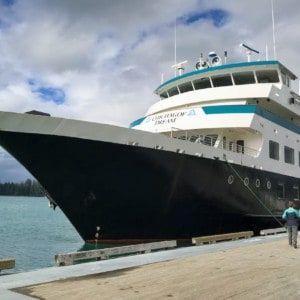