But what’s a float out? It’s a ship-building term that refers to the first time during construction that the ship’s hull touches the water.  It’s a major event marked with speeches, dedications and a little superstition.

So it was on June 25 in Ancona, Italy at the Fincantieri shipyard.  The Viking Sea float out ceremony began as the Adriatic Sea was allowed to flow into the below-ground construction dock.

The water slowly flows into the construction area so the ship can float for the first time.

“The day that a new ship first touches water is always a special day, and today is indeed a proud one for our Viking family,” said Torstein Hagen, founder and chairman of Viking Cruises. “We have no doubt that her sister ship, the 930-passenger Viking Sea, will be met with the same reception upon her debut next spring.”

The Viking Sea is set to launch in early 2016. The company’s third ship on order, Viking Sky is also under construction in Ancona and will debut in 2017.

Who will be the godmother for the Viking Sea?

In addition to the float out of Viking Sea, the company also announced that Karine Hagen, Viking’s senior vice president of product and daughter of Torstein Hagen, will be godmother to Viking Sea and will officially “name” the ship during the christening ceremony in early 2016.

“Viking Sea is a magnificent ship, and I am very honored to be her godmother,” Karine said at the ceremony. “It has been a great pleasure to meet so many of the Fincantieri Ancona shipyard staff today, and share the pride in their work.”

The float out ceremony

Viking Sea’s float out began at approximately 10:30 a.m. local time, with the maritime tradition of welding coins under the ship mast.

Called Mast Stepping, gold coins area welded where traditionally there would be a mast on sailing ships and is thought to bring good luck.  The ceremonial practice of welding gold coins to the ship’s mast dates back to the ancient Romans.

Karine welded Norwegian commemorative coins representing four generations of birth years in her family including her grandmother, her father (and company founder), and her own and her yellow labrador’s birth year.

Karine then cut a cord to allow water to begin flowing into the ship’s building dock. Following a two-day process that will set Viking Sea afloat, she will then be moved to a nearby outfitting dock for final construction and interior build-out.

And the only reason for the “almost” is that guests can choose to upgrade their onboard experiences.  If you choose not to purchase addition shore excursion or other premium onboard amenities, then consider a Viking Ocean cruise to be all-inclusive.

The understated Scandinavian interior design features all balcony staterooms.  There will be a complimentary shore excursion offered in every port, and the port charges and all taxes are rolled into the cruise fare. More complimentary amenities include: beer and wine with lunch and dinner service; Wi-Fi; self-service laundry; access to the Thermal Suite in the LivNordic Spa; and 24-hour room service.

What to expect onboard the Viking Sea

In addition to the Main Pool with a retractable dome permitting any-season swimming, the ship features a glass-backed Infinity Pool off the stern.

In keeping with Viking’s Nordic heritage, The Spa onboard is designed with the holistic wellness philosophy of Scandinavia.  Guests can go from the sauna to a Snow Grotto where snowflakes gently descend from the ceiling through chilled air.

Spaces designed to facilitate mingling and storytelling, the two-deck Explorers’ Lounge at the bow is the perfect spot for taking in scenery through double-height windows over a glass of aquavit or pint of local craft beer; and the Wintergarden is a serene environment in which to relax and enjoy afternoon tea service complete with a hand-selected teas.

If you watch the video above, you’ll get an idea as to how Viking is designing their ocean ships to be energy-efficient and leave less impact on the environment than most other cruise ships today.

Reservations are now being taken for cruises that begin Spring 2016.  The planned itineraries for all three ships consist of Scandinavia and the Baltic; and the Western and Eastern Mediterranean. 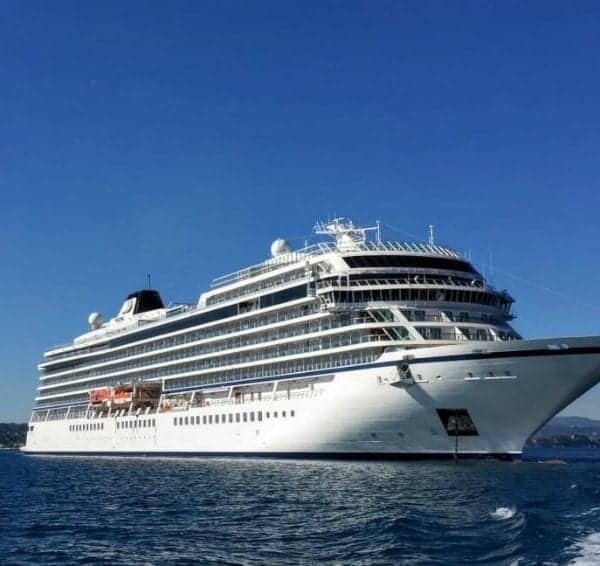 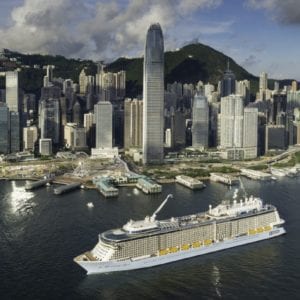 Quantum of the Seas Arrives in Hong Kong