Holland America recently celebrated a significant construction milestone for their new, Ryndam, their third Pinnacle Class ship.  This will also be the fourth ship in Holland America‘s history to be named Ryndam.

The milestone marked the successful launch of the forward lower section of the ship, also known as the “troncone.”  The event took place at Fincantieri’s Palermo shipyard in Italy on October 3, 2019.

After an official blessing by Padre Giovanni Cassata, Madrina Giuseppa Catalano cut the rope to release the celebratory bottle of Champagne that smashed against the ship’s hull for good luck. Ryndam is expected to be delivered in May 2021.

READ NEXT:  My 14-day transatlantic crossing aboard Holland America Koningsdam

At 269 feet long, 115 feet wide and weighing 4,400 tons, the new section will soon leave the Palermo yard and be moved to Marghera for an early-November arrival.

“This is Ryndam’s first major milestone since the steel cutting, and it’s so exciting to see a large portion of the ship taking shape and already in the water,” said Orlando Ashford, president of Holland America Line. “Watching a new ship come together piece by piece builds anticipation, and we will soon be announcing the inaugural itineraries for Ryndam cruises in summer 2021. Like her sister ships Koningsdam and Nieuw Statendam, Ryndam will be a true masterpiece.”

The next major milestone in the construction of the 2,668-guest Ryndam will be the keel laying ceremony when the ship’s first block is placed into the drydock. From there, blocks will be added weekly until the steel structure is complete in July 2020, and the dock can be flooded for the official float out.  The new Ryndam will be similar to Pinnacle Class sister ships Koningsdam and Nieuw Statendam. 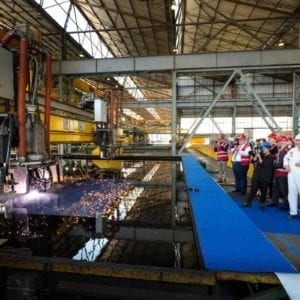