Everyone was exhausted. By 10:00pm of our boarding day, the lounge and outside decks were deserted. Our Un-Cruise Adventures Columbia River cruise itinerary planned to have us off the ship by 9am so I wasn’t the only one who called it an early night.

Early-risers breakfast began at 6:30am and I was one of the first guests to grab a cup of coffee. Nice…they put out a shaker of cinnamon that I happily sprinkled into my empty cup. “Supposed to help ward off colds,” said a vivacious 92-yr old woman on my last river cruise. Real or placebo, I was happy to add it to my coffee.

As the passengers slept, the S.S. Legacy quietly crept up the Columbia River to dock at sunrise at the Port of Cascade Locks, Oregon. A tiny seasonal tourist town, Cascade Locks boasted a little post office, a riverside Best Western hotel, a closed Chinese-American restaurant and a Dairy Queen.

Along the lovely grassed waterfront stood a small white wooden house that was once the locks tender’s home, built in 1905. Today it is the Cascade Locks Historical Museum that showcases the development of Cascade Locks along with photographs, memorabilia and Native American artifacts.

Open only from May through September, it’s a treasure trove of regional information about the railroads, the massive Columbia River Gorge and the old-time boats that plied the Columbia in the 1800s.

In front of the museum and encased in a climate-controlled exhibition chamber is the Oregon Pony steam locomotive built in 1862.

The tiny Oregon Pony was the first of its kind to be built on the Pacific Coast and used in the Oregon Territory, according to the official description. It carried both passengers and goods along the river’s edge for several years.

From our ship to the motor coach at 9am and we were off on a very short ride to the Bonneville Dam and Hydro Electric Powerhouse.

While the private guided tour of the powerhouse was incredibly interesting, the most fun was when we toured the Bradford Island Fishway, past the fish ladders and into the building where, slightly below the water lever, we watched salmon of all sizes, from little fingerlings to arm’s length.

All sorts of salmon swam past the huge windows as they made their way from the river, eventually to the Pacific Ocean on their migration route. There’s even a designated fish counter (a real person) who sits alone in a small room armed only with their own large window and a computer. It’s from here that each and every salmon is counted, its species identified, as it makes its arduous journey to the ocean.  Click here to answer all of your salmon-related questions!

Back on the comfortable coaches, we were headed to a little gem in the wilderness; Multnomah Falls.

Cascading more than 600’, Multnomah Falls is one of those hidden wonders that you just don’t learn about until you study Oregon geography or are part of a tour group.

Nestled near the shore of the western Columbia River Gorge, the Falls is the #1 tourist destination in Oregon. Who knew!

Not at all visible from the main highway (Exit 31), visitors park in the expansive lot, walk through the tunnel beneath the highway and emerge near the entrance to the interpretive center and gift shop. Walk past the Center and proceed up the paved path that leads to the lower viewing area. Walk a series of gentle switchbacks to reach the precarious-looking bridge for a closer look at the Falls.

Our tour allowed nearly a full hour to walk, visit the shop and of course buy some of the homemade fudge, adjacent to the interpretive center.

And that concluded the day’s shoreside activity. Back on board by noon, everyone headed into the dining room for lunch. The remaining activities included a Lewis and Clark lecture, yoga on the sundeck and as always, Happy Hour preceded dinner.

I nearly forgot! Because there was a unique total eclipse of the moon and also a Blood Moon, dinner was one hour early at 5:30 (gasp!) followed by a viewing of the lunar event on the sundeck.

Clear skies prevailed and it was a spectacular event. All of the S.S. Legacy’s 56 passengers were outside for the viewing.

Once again, by 10pm, not a soul could be found on deck or in the lounge.  I wandered back to my cabin and called it a night, too.

Day 1: Aboard the S.S. Legacy to cruise the Columbia and Snake Rivers
Day 2: Bonneville Dam and towering Multnomah Falls (That’s this one!)
Day 3: A relaxing “sea” day on the river.
Day 4: Jet Boating through Hell’s Canyon
Day 5: Walla Walla Wineries, the Whitmans and the Oregon Trail
Day 6: Maryhill Museum, The Dalles and a real Stonehenge
Day 7: Following Lewis and Clark to Fort Clatsop and a visit to Astoria, Oregon 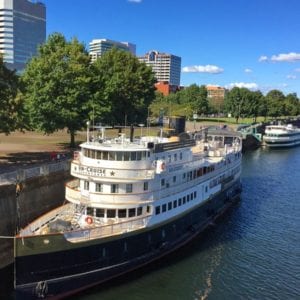