Two and one-half days. That’s how long it takes to travel 2,438 miles by train from Chicago to Emeryville, California. Slightly over 48 hours, if the Amtrak California Zephyr is on time.

Spectacular Scenery and a Cozy Bedroom on the California Zephyr

A trip aboard the Amtrak California Zephyr eluded me for years. Anytime I’ve had to get to California or even Las Vegas, I’ve taken the Sunset Limited from New Orleans or the Southwest Chief and the old Santa Fe Super Chief from Chicago.

Finally, I stepped aboard the Amtrak California Zephyr to discover new territory.

My Kind of Town

While waiting in the Metropolitan Lounge at Chicago’s beautifully restored Union Station, our train was announced with such fervor I felt as through we were about to board the steam locomotive for Hogwarts. “Train Number 5,” melodiously bellowed the uniformed attendant. “Amtrak California Zephyr leaving from Track 16 is now ready for boarding.” “Train 5,” he repeated, “the California Zephyr. All Aboard!”

It was a beautiful autumn afternoon in the Windy City as our train rumbled through the underground darkness of Union Station and into the sunlight. Through endless ribbons of rail until our train turned southwest towards the Chicago suburbs.

I settled into my cozy roomette and soon was greeted by our car attendant Donnell. He stopped at every compartment, introduced himself and explained how to manage all of the buttons and lights switches.  Since I’m no stranger to an Amtrak roomette, he only spent a few minutes chatting with when the Dining Car Manager came by to request my dinner reservation.

The first question readers ask me is: what the heck does someone do all day on a train? My day went sort of like this…

After Donnell stopped in, it was time to settle into my roomette and unpack what I would need for the next two days. Life aboard an overnight train is easier if you pack a small bag purposely for the that trip. I checked my iPhone a zillion times for social shares and various websites related to my trip, stared out the window way too much and watched a downloaded episode of Blue  Bloods.

Then at some point, I walked three cars back to the Observation Car to gaze as we left the golden fields of Illinois and slowly crossed the wide Mississippi River into Burlington, Iowa.

Dinner in the dining car

I shared a table with Gloria, a very lovely woman from Iowa traveling all the way to Emeryville, California (the last stop on this route) to visit her daughter. We were soon joined by a middle-aged man who referred to his wife as “Mother.” I thought Gloria was going to elbow me in the ribs every time he said it. I could barely keep from cracking up.

Just like on a cruise ship when you’ve overstayed your welcome in the dining room, we were politely asked to please leave the dining car.

Back in my roomette around 8:30pm, I began to outline this article, sorted through a couple hundred photos to get rid of the clunkers and before I knew it, it was nearly 10:30pm. A couple of Frasier episodes on my iPad and I was asleep. By early morning, we’d set our clocks back an hour and were due to arrive in Denver by 8:30.

It’s a slow climb up to the Mile-High City so you don’t notice the altitude change. I awoke to learn that we were an hour and a half late and we’d be in Denver by 10am.

That was okay with me because it meant I could have breakfast in the dining car and be done in time to step off the train in Denver for some fresh air and stretch my legs.

Leaving Denver , the scenery really began to change. We slowly chugged up and around precarious mountain switchbacks to reach an ear-popping altitude of over 9,000-feet.

Past unopened winter ski resorts and grazing antelope, old western towns and fading sagebrush, our train climbed and descended for the better part of twelve hours.

One stop of interest was the year-round resort town of Glenwood Springs. Within walking distance of the Amtrak station, the old Glenwood Springs Resort attracts visitors no matter what the season.

Note to self: Next time, plan to spend two nights in Glenwood Springs. Get a car rental and take day trips and explore the surrounding mountain towns and roads.

What did I accomplish today? Nothing. Except to take nearly 500 photos as we continued along hundreds of miles of some of the most beautiful scenery imaginable. And jot down random thoughts and ideas. For instance…

People always rave about the fabulous trains in Europe; fast, clean and efficient. We have Amtrak. Slow, tired and rattling along on the rails. In Europe when you’re traveling at nearly 200 mph, the scenery is blurred. Mountains aren’t traversed, they’re tunneled through. You can only see the Alps in the distance. By the time you get close enough, you’re inside the mountain.

With the exception of a few designated European scenic trains like the Bernina Express, you don’t see the scenery, you go underneath it. Or zoom past so quickly that you get dizzy as your eyes dart back and forth trying to focus.

Amtrak, despite all its flaws and outspoken critics, provides passengers with an up-close view of snow-capped mountains, bison herds on the high desert plains and glacier lakes that glisten in the morning sun. It doesn’t get much better than that. But I digress.

As we approached the area where Colorado meets Utah, we entered a stretch named Ruby Canyon. The timing was perfect. It was nearing the Golden Hour when the sun’s light cast long shadows and the sandstone cliffs changed color as we rounded each new bend.

Night falls quickly in the mountains and it was nearly dark when I was seated in the dining car for dinner at my usual time. New tablemates, Roland and Brian, provided exceptionally engaging conversation and dinner passed by a little too quickly for me.  We could have gabbed away for another hour at least.

One More Night on the California Zephyr

We were scheduled for a late night stop at Salt Lake City where I planned to grab a bit of fresh mountain air and walk the platform for a few minutes.  I saw the inside of my eyelids instead.

The next day, the last day of our journey, we woke up somewhere in Nevada crossing the rugged Sierra Nevada mountains until we reached California. Slowly, the California Zephyr made its last descent through the infamous Donner Pass and skirted alongside Donner Lake.  A docent from the Sacramento Railway museum was in the observation car and narrated the history of Donner Pass and sights to see along the way.

It was all downhill from there. Literally. By lunchtime we were nearly at sea level as we neared the capital of California, Sacramento and the end of my almost-transcontinental train ride.  Once in Sacramento at about 2pm, I checked into a “hotel” near the train station and made a mad dash to visit the California State Railroad Museum, with only two hours to spare til closing.

My wish list fulfilled:  A beautiful train ride aboard the California with great weather followed by a visit to an outstanding Railroad Museum.

Why travel on a long distance train?

Just as I’ve met cruise people who take the Queen Mary 2 back and forth across the Atlantic for a “joy ride,” so have I met train people who simply ride the train for the sheer enjoyment of it.  You don’t need a specific reason for a train journey – go just for the fun of it. Rail on!

Read next:  My 29 best tips for an overnight Amtrak train trip 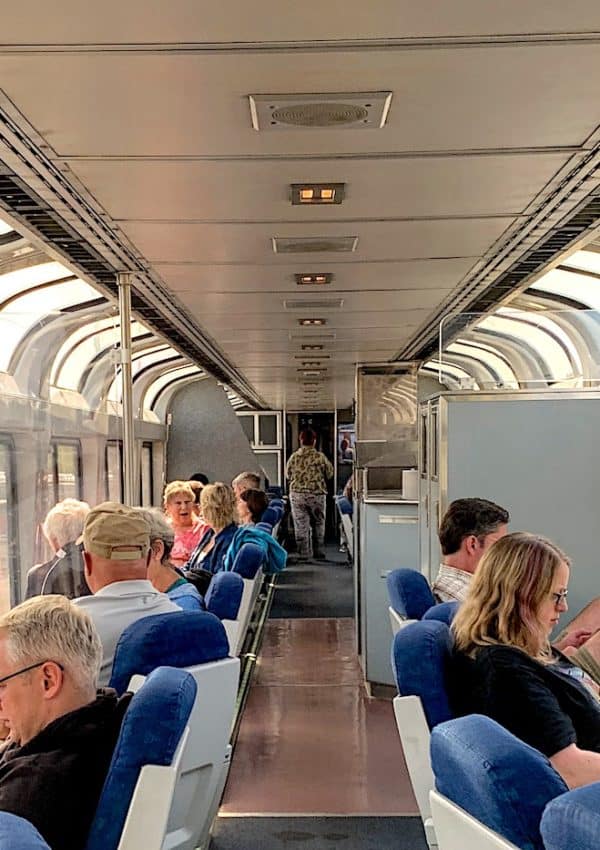 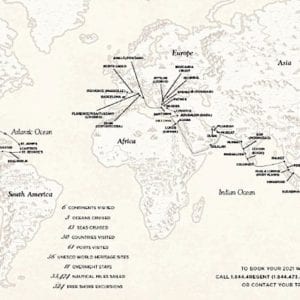 Last Updated on February 13, 2021 by imarkinteractive