It’s a short walk to the city center when you stay at the Park Hyatt Hamburg.

Hamburg, the Park Hyatt Hamburg and Queen Mary 2 are a vacation trifecta.  Hamburg, Germany’s northern port, is the third largest port in Europe and home to cruise and cargo ships from all over the world.

The rumors are true. Whenever the Queen Mary 2 makes an appearance in Hamburg, throngs of locals line the pier to wave hello or bon voyage, no matter what the weather.

I wanted to see for myself so I decided to begin my transatlantic crossing in Hamburg instead of the usual Southampton.

Here’s a quick video of locals lining the port of Hamburg when Cunard ships are in town.

I’ve been to and through Hamburg three times. The last two times, the most I stayed was one night. I don’t stay in one place very long it seems.  So when I visit Hamburg, I want to be as close to the city center as possible. The Park Hyatt Hamburg felt like home, even if only for one or two nights each visit.

Hamburg is a beautiful, modern city on the Elbe river.  From the Park Hyatt Hamburg exit on Mönckebergstrasse, as soon as you leave the hotel, voila! You’re on the main shopping street.  Not the bustling area by the river, but a regular shopping street with restaurants, shoe stores, cosmetics and all sorts of clothing stores.  Maybe 4-5 blocks long and the Park Hyatt is almost right in the middle.

From the train station,  Hamburg Hauptbahnhof, it was a short taxi ride to the hotel. With the hotel’s lobby on the floor above street level, I caught the elevator near the Park Hyatt’s discreetly marked entrance door.  When the doors opened onto the reception floor, the busy-ness of the street vanished and a warm elegance greeted me.  Within minutes I was in my room.  And it was one of the largest non-suite hotel rooms I’ve ever stayed.

And what’s up with Pringles? EVERY hotel in Europe seems to have a mini-can of Pringles.

And some fresher snacks too.

I had been emailing with the Park Hyatt’s Nadine Tscherkasov-Schwarz to arrange my taking photos around the hotel.  She graciously invited me to visit the Concierge Lounge.  Hungry and tired after my walk around town, I accepted.

Here’s a glimpse of one of most contemporary food displays in any Concierge Lounge I’ve had the pleasure to meet:

Before I knew it, it was late and I had planned to go downstairs for breakfast about 8am, get some work finished and check out of the hotel on-time.  Even though I didn’t get to Hamburg from Berlin until nearly 3:30pm and dusk, as you can see from the clock in the photo below, was before 5pm, there was enough time to stroll the city.

Just enough time to catch the pink and blue afterglow of sunset.

Along the banks of the Elbe river are hotels, river boats for day tours and an assortment of shops and cafés.

As you can see, it was nearly dark by the time I returned to the hotel at almost 5:30.

Up to the Concierge Lounge, down to the dining room…

and yet another Currywurst dinner.  What’s up with that…it’s almost addictive.

For more information, click here for the Park Hyatt Hamburg.

In full disclosure, I was a guest at the Park Hyatt Hamburg, but not as a journalist. I was a “regular” guest.  I had won a night’s stay from the German Tourism Bureau with the Park Hyatt at a travel industry conference. 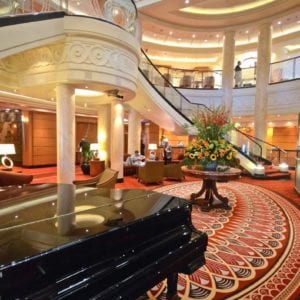