Pic of the Day – Day 3 and a Passover Seder

This was my second experience aboard Koningsdam for their Passover Seder.  Not a highly publicized event, it’s noted in the daily planner.  If you want to attend, call the front desk and request a reservation.

The Lido Buffet waitstaff went out of their way to serve the Kosher-style components of the dinner, including the beautiful Seder Plate, my pic of the day. Each component in its little dish on the Seder Plate has a significance in the story of Passover.

A ritual hand-rinsing station was set up at the entrance to the buffet room.  Two waiters handed small towels to everyone.  Traditional Haggadahs (Passover books used during the dinner that tell the story of how the Jewish people escaped from slavery under Pharoah’s rule to freedom) were handed out to all.

Someone assumed the role of “Rabbi” to lead everyone through the story-telling, wine-sipping, singing and alternative readings.  As I remember from my childhood…it seemed to take forever until we could finally eat!  But eat we did and the gefilte fish, matzo ball soup and roast chicken were delicious.

As the sun set behind us, another Passover Seder aboard Koningsdam slowly drew to a close.  Everyone said their thank-you’s to the staff and chef who really went way out of their way to ensure a wonderful holiday dinner for all. 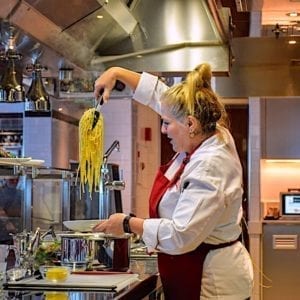 To Europe and Beyond 2018 – Day 2 Aboard Koningsdam