At the start of every transatlantic voyage, I wonder how in the world I’ll spend the next week or two and not go stir-crazy.  This crossing aboard Holland America‘s Koningsdam there were 6 consecutive sea days.  Not too bad really.  There would be a few more ahead of us, but until we reached the Azores, it was just seven nights and six days.

Holland America has an interesting partnership with America’s Test Kitchen.  Koningsdam has a purpose-built kitchen and restaurant combination.  In the morning there’s an America’s Test Kitchen chef conducting cooking demonstrations.  By night, it’s dinner at the Culinary Arts Center for-a-fee dining venue.  It was only $15 per person on my sailing and reservations are suggested.

Today’s cooking demonstration was Pasta with Garlic and Oil  and that’s the recipe.  As you can see, Chef was having fun with the pasta.

I decided that if I was going to do anything consistently during this cruise, it would be to go to every cooking demonstration offered (only on sea days).  There would be a lot of sea days and a lot of new recipe cards to take home.

Read next: Cruise Maven can cook! – here’s my recipe for a beautiful pesto.

Other than this pasta class, I really didn’t do much else on our first day at sea.  The weather was springtime balmy, just a touch of winter’s leftover coolness in the seabreeze that blew in from the north.  But sitting in the sun, you would think it was mid-summer.

First-days aboard ships are really a time to get acquainted with your new temporary home.  Sometimes it overflows into the second day.  And other times, it isn’t until your last sea day that you finally discover that little hidden hideaway or some new activity that you wished you had more time to try.

Given the size and scope of Holland America’s Koningsdam, even though I did the same exact crossing on this ship last year, it would take me at least a couple of days to get reacquainted.  No rush.  No port calls for a week.

Enjoy America’s Test Kitchen pasta recipe! And arrive early to the cooking demos if you want a chair with a view of the show. 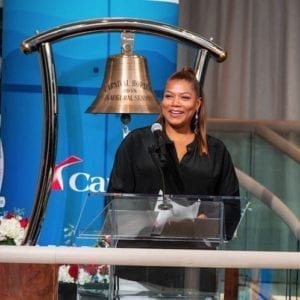