The Main River is sandwiched between the Rhine and the Danube and a mere 326 miles long. The headwaters begin in Bavaria, Germany, just above Mainz. The river flows toward cosmopolitan Frankfurt, through rolling, pastoral countryside and steep vineyards until it reaches medieval Bamberg.

Expect activities on a Main river cruise to include the option to explore ancient towns and villages, sip new vintages at local wine tastings or just kick back and watch as the scenery slips by. Don’t be surprised if you lose your sense of direction. The Main River bends and curves as small grassy promontories jut out into its path, nearly the entire length of this small river.

When your river boat docks in some of these smallest of towns, be sure to go ashore and walk around as much as you can. In some towns you’ll find memorial brass plaques embedded in the sidewalk to indicate homes from which Jewish families were abducted and sent to concentration camps. Roman monuments that have stood the test of time can be found nearly everywhere in every city.

As the Main River passes through Bamberg it merges into the new Main-Danube canal. Built in 1992, the Rhine-Main-Danube Canal makes it possible to travel the entire 2,200 miles of the Rhine, Main and Danube rivers from the North Sea to the Black Sea, through fifteen countries along the waterway. 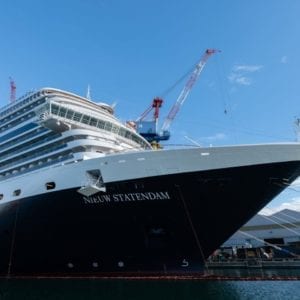