Viking Cruises announced that their ocean ship, Viking Star, is now outfitted with the first PCR Laboratory found on any cruise ship.

When the CDC released its Framework for Conditional Sailing, they included a list of requirements for all cruise ships to follow to resume cruising.  One of these requirements included that ships “build the laboratory capacity needed to test crew and future passengers.”

Viking announced the completion of the first full-scale PCR (polymerise chain reaction) laboratory on a cruise ship, aboard Viking Star.  The onboard laboratory will be able to process COVID-19 testing for crew and passengers on a daily basis.

The test is the non-invasive saliva test.  Not the “Q-Tip up the nose” test, the original way to screen for the virus.  The CDC includes daily tests for coronavirus as a requirement to resume cruising.

Why are PCR tests are needed to resume cruising

Antibody tests that reveal a person’s build up of antibodies once used to fight off COVID-19.  PCR tests detect actual genetic bits of the virus…the RNA.

Genetic material is only present when someone is actively infected.  In other words, PCR tests look for an antigen that reveals a current infection.  Antibody tests only indicate a prior infection and immune response.

With crew and passengers having this type of test before they board and daily during the cruise, the ship’s medical team will know early on if someone has contracted the virus.  Then mitigation steps to prevent the spread, isolate or quarantine, and contact trace will begin sooner rather than later.

READ NEXT:  My Viking Star Review

Just having the laboratory on a cruise ship isn’t enough to pass CDC muster.  This first-ever cruise ship addition aboard Viking Star will need to undergo extensive testing to make sure that it’s capable to actually process daily PCR testing for all passengers and crew.  Viking has not stated if a laboratory will be added to more Viking ocean cruise ships.

“We have been working on this for a number of months, and today is important as it moves us one step closer to operating cruises again, without compromising the safety of our guests and crew. The recently announced CDC guidelines are clearly aligned with our public health research, and we welcome the agency’s push toward testing, as we believe this is the only way to safely operate. In our view, continuous PCR testing, along with our extensive onboard hygiene protocols, will lead to making Viking ships a safe place to get away to and explore the world.”

Viking Star will arrive in Oslo, Norway in mid-November.  At that time, Viking will demonstrate the workings of the new laboratory as well as revised health and safety protocols. 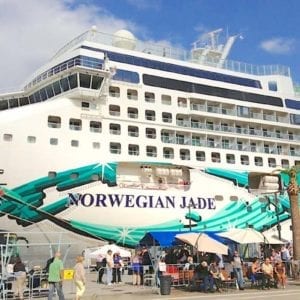