A major milestone was reached earlier this week when Viking Ocean Cruises took delivery of its new Viking Jupiter, the sixth ocean ship for Viking Oceans.  The ceremony took place at Fincantieri shipyard in Italy.  The traditional maritime event culminated when the ship builder symbolically handed the keys for the vessel over to the ship’s owner.

From this month through April, Viking Jupiter heads out on her maiden season with cruises in the Mediterranean.  A new itinerary, Journey to Antiquities, sails between Athens and Rome.  Note that these voyages are planned for the off-season so if you don’t like crowds, this is for you.

Viking Jupiter official naming ceremony will be held in Oslo, Norway on June 6, 2019.  The dedication ceremony will feature the ship’s godmother, Sissel Kyrkjebø, an acclaimed Norwegian soprano.  From Oslo, a season of northern Europe cruises begins.  Itineraries include voyages between Amsterdam, Bergen-Norway and Stockholm-Sweden.

Like Viking’s other five sister ships, the all-verandah Viking Jupiter features 465 staterooms and can accommodate 930 guests.  A wide range of itineraries are offered that stretch from eight- to 22-days.

Cruise fares include a verandah stateroom, a complimentary shore excursion in each port, all onboard meals and all port charges and government taxes.

Read Next:  Why I love a Viking Star verandah stateroom

Ten additional ships will join the fleet which would bring Viking’s ocean fleet to 16 ships by 2027.  Visit Viking Cruises for more information. 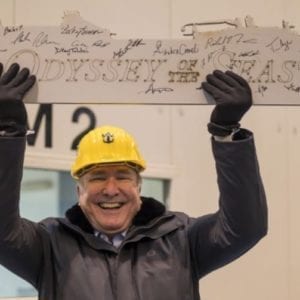