When bad weather forced Royal Caribbean’s Empress of the Seas to change course last week, officers on night watch spotted a flashing signal light in the distance.  For security reasons, the ship confirmed the stranded vessel’s identity and checked with nearby ports that might be able to send rescue boats.

On Friday night, as Empress of the Seas was rerouted from Cienfuegos, Cuba to Ocho Rios, Jamaica, the 2,020-passenger cruise ship approached the drifting little gray fishing boat.  About 7:00 P.M., halfway between Ocho Rios and Grand Cayman, the cruise ship contacted rescue centers on Jamaica and Grand Cayman to ask if they could send assistance.  Because of rough seas, they were unable to provide rescue operations.

Adrift at sea for 20 days without fuel and very little fresh water left, the two men survived on the fish they caught. While asleep at night, their boat simply drifted further out to sea.  Until it was spotted by the serendipitous rerouting of the cruise ship.

Within three hours, Empress dropped their tender (life boat) into the sea, motored to the stranded boat and rescued the two men.  One of the men was too weak to walk and had to be carried onto the tender.  Once onboard the ship, the men were taken to the medical facility for examination and given fresh drinking water.  The men said they were almost out of drinking water and survived on the fish they caught.

After docking in Ocho Rios, the men were transported to hospital.  In a show of generosity and possibly in the Christmas holiday spirit, crew members quickly collected $300 for the men to use for clothes and food after they’d leave the hospital in Jamaica. 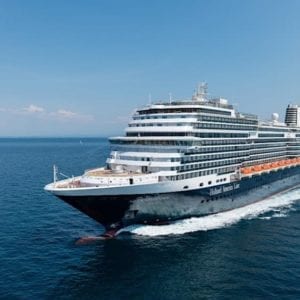