Earlier this week, Port Everglades welcomed the 2,666-passenger Nieuw Statendam to its new home port in Fort Lauderdale.  Sister ship to Koningsdam, Nieuw Statendam is the second Pinnacle Class ship and one of the largest ships in their fleet.

What’s new on the Nieuw Statendam

The new ship will have many of the same features found aboard Koningsdam, including the Music Walk which includes the same three live music venues.  The three music venues are Billboard Onboard for Billboard top hits, Lincoln Center Stage for classical music and B.B. King’s Blues Club and the All-Stars Band.  Nieuw Statendam is the first Holland America ship to have the Rolling Stone Rock Room.  In partnership with Rolling Stone magazine, there’s a five-piece band that chronicles four decades of rock history.

In addition to the ship having 16 more passengers than Koningsdam, the Culinary Arts Center is gone and replaced with Club Orange, serving breakfast and dinner.  This new specialty restaurant has a $50 per person per day fee for non-suite guests but is included for those staying in a suite.  The menu is similar to Pinnacle Grill but with additional offerings.  America’s Test Kitchen is back but will be in a different venue since the Culinary Arts Center is now Club Orange.

Also on Nieuw Statendam is the Grand  Dutch Café, one of my favorite spots for a light meal.  It features authentic Dutch food including a wonderful Dutch Pea Soup, open-faced herring sandwiches and french fries with mayonnaise.  You can also try Dutch liquors such as Genever and Advoccaat.

Read more:  My 14-night transatlantic crossing to Europe aboard Koningsdam 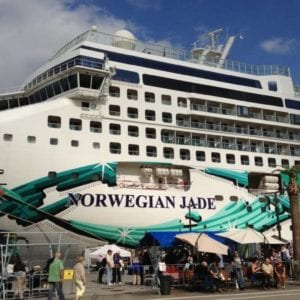