Looks like it’s the end of the line for Carnival Fantasy.  And the beginning of a massive sell-off.

When Carnival Corporation announced a $4.4 Billion loss for 2nd quarter of 2020, Carnival, PLC made the decision that it would sell over a dozen of its ships from across its cruise lines.  Following last week’s sale of Costa Victoria, this week saw Carnival Fantasy leave the fleet.

Holland America Line announced that Amsterdam, Maasdam, Rotterdam and Veendam will be leaving the fleet and transferring to undisclosed buyers.  Well not totally undisclosed.  The next day, it was revealed that a Norwegian small ship cruise line bought two of them.

It’s officially on the November ballot, based on 2,500 signatures of a required 1,000 for a vote.  The organization, The Key West Committee For Safe Cleaner Ships, wants to greatly restrict certain cruise ships from being allowed to dock at Key West.  They also want to limit the amount of cruise passengers permitted to disembark.

The requirements to dock in Key West would include:

We’ll see what happens this November when the votes are counted.

You can fly to St. Maarten…

St. Maarten is ready to welcome visitors again, provided they adhere to the island nation’s rules.  This includes mandatory mask-wearing at all times.  The Ministry of Health guidelines state that in addition to wearing a mask, you must also follow social distancing, and avoid touching your eyes, nose and mouth.

Plus, everyone over the age of 10 must have a PCR test taken no more than 72 hours prior to the day of travel with of course negative results.  The PCR test works by detecting viral RNA which is present before symptoms or antibodies are present.

At this time, the island is open to tourists from everywhere in the world, except the United States.  However, St. Maarten is preparing to welcome Americans beginning August 1, but the welcome mat is subject to change.

CDC Says No to Cruises, Again

It was no surprise.  The CDC has extended their No Sail Order until October.  This is the third extension placed on cruise lines returning to service since the first order on March 14, 2020.  There are certain conditions that must be met in order for the CDC to lift the restriction.

Related Article:  Details about how CDC could end No Sail Order 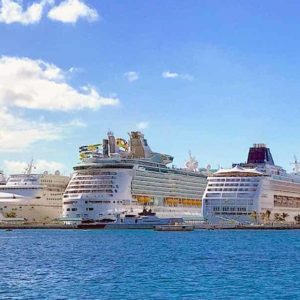