It’s been a better cruise news week this time around.  The gloom and doom that’s been the cruise world for the past year seems to be lifting ever so slight. We’re starting to see some exciting building around Carnival Mardi Gras reveals as well as over at Viking and a new ship building project.

Despite my love for pizza, somehow this particular day escaped me.  But Carnival didn’t forget and shared some timely and an Italian-themed update for Mardi Gras.

On National Pizza day, Carnival revealed more details about the new Mardi Gras and La Piazza, the newest of six themed zones.  This Italian-themed zone will have a larger Pizzeria del Capitano than other ships.

Also located in La Piazza will be the new Piazza Panini for all sorts of panini sandwiches plus another new feature, Bar Della Rosa wine and prosecco bar.

Mardi Gras is still expected to debut in Port Canaveral on May 29 this year.

A Change in Health and Safety Protocols at Carnival

Last weekend, Carnival posted on its website information dealing with health and safety protocols under CDC guidance that the cruise line would implement when sailing began.

Some of the topics mentioned on their website suggested that certain areas of the ships would need to operate at reduced capacity.  Plus there was the possibility that reservations might be necessary to access certain usually very-crowded public spaces.  In particular, casinos, gyms, pools, restaurants and bars and entertainment venues.

A few days later, Carnival had to retract its statement saying that the posted information had not been finalized.  The spokesperson did confirm that guests should expect to wear masks, have covid testing, distancing and follow other protocols.

The island of Cozumel, in the Caribbean Sea off the coast Mexico, is trying to attract European cruise lines to visit and even home port their ships.

Cozumel is a popular destination and port for excellent scuba and snorkeling plus it’s a short ferry boat ride from there to the Mexican mainland at Playa Del Carmen for tours to Mayan ruins.

It will be at least until May that cruise ships could depart from the U.S. as the cruise industry attempts to fulfill the CDC requirements to resume cruising.

Canada announced an extension on their cruise ship ban that will run through February, 2022.  Not only does this cancel the Alaska cruise season for ships with over 100 passengers and crew, it also affects Canada/New England cruises.

Alaska officials have already reached out to the Canadian and US governments to try and find a workaround solution in the interim.  One of these ideas is to cancel the Passenger Vessel Services Act.

For Alaska cruises, this requirement is met with a stop at Victoria or Vancouver, British Columbia.  On the east coast, a perfunctory stop might be St. Johns in New Brunswick or Halifax, Nova Scotia.

Included in the mandate, there is a little wiggle room that gives the Canadian Minister of Transport the choice to rescind the Interim Order if the pandemic health crisis dissipates.

Viking Begins Construction on Their Next Ocean Ship

At the shipyard in Italy last week, Viking celebrated as the keel was laid for their eighth ocean  ship, Viking Mars.

Sister ship to the seven previous ocean-going vessels, Viking Mars will be able to accommodate 930 passengers in 465 staterooms.  The ship will also weigh in at 47,800 gross tons.  Viking plans a 2022 delivery for Viking Mars.  Their seventh ocean ship, Viking Venus, is on track to enter service this year.

And that’s a cruise news wrap for this week. 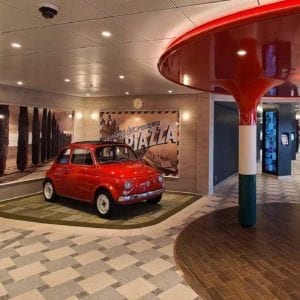