In conjunction with a new movie, “Let Them All Talk,” by HBO Max and filmed aboard Cunard flagship Queen Mary 2, Cunard is holding a sweepstakes event. The cruise line is giving the winner and their guest a cruise aboard a Queen Mary 2 Transatlantic Crossing from New York to Southampton.

The sweepstakes winner and guest will experience the crossing in the same exclusive Queens Grill suite that Meryl Streep stayed in during the filming.

The movie “Let Them All Talk” was directed by Steven Soderbergh, and stars Meryl Streep, Dianne Wiest, and Candice Bergen.  The plot begins as Streep’s character boards a transatlantic cruise to the UK and stays in Queen Mary 2‘s Queens Grill suite.

READ MORE:  How to Travel With Your Pet On Queen Mary 2

Queen Mary 2 was launched in 2004 and, like her Cunard predecessors, has carried royalty, movie stars, renown musicians, scientists and authors across the Atlantic.

This time Cunard’s only remaining true ocean liner is the setting for a feature film.  In “Let Them All Talk,” you’ll get an insider’s view of the ship, public rooms and a peek at the inside of a Queens Grill stateroom.

I’ve been crossing the Atlantic aboard Queen Mary 2 almost every year since 2005 and have always spent the week’s crossing in an inside, oceanview or balcony stateroom.  Neither Princess Grill or Queens Grill was anywhere near my budget!

During the seven days at sea, I’ve always thought about writing a story that takes place aboard the ship. While the storyline for “Let Them All Talk” is not something I would ever write, at least the ship was similar.

To enter the Queen Mary 2 “Let Them All Talk” Cunard sweepstakes visit the Cunard Movie Sweepstakes page. The sweepstakes is open to legal residents from all 50 states and Washington, DC.  You must enter by March 31, 2021 for a chance to win.

“Let Them All Talk” is currently streaming on HBO Max. 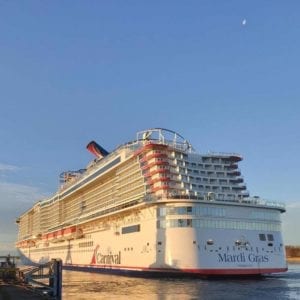