Viking River Cruise fans take note: there’s a new Viking River ship, Viking Ra.  Viking River recently bought another river ship (rather than build one from scratch) and completely gutted it down to the steel frame and totally rebuilt it to Viking River standards.

With a name like Viking Ra, for the Egyptian sun god Ra, you can expect a spectacular new ship for the Nile that reflects its namesake.

Named not only for the Egyptian sun god, the name Ra also invokes the memory of famed Norwegian explorer Thor Heyerdahl, who christened his ocean-going papyrus-reed boats Ra and Ra II.

Highlights of the Viking Ra include:

Viking Ra will offer a 12-day Egypt itinerary that begins with a three-night stay in Cairo.  Guests can sign up for tours that include a visit to the Great Pyramids of Giza, the Grand Egyptian Museum and the Mosque of Muhammad Ali.

After the Cairo excursions, guests fly to Luxor to view the Temples of Luxor and Karnak.  Then they’ll board Viking Ra for a seven-night round-trip cruise on the Nile from Luxor to Aswan.

Shore excursions during the cruise include a trip to the Valley of the Queens and a visit to the tomb of Nefertari, wife of Ramses II.  Guests will also pay a visit to an elementary school in a Nubian village.  Visits to several noted temples are also included.

This new cruise tour, Pharoahs and Pyramids, then returns to Cairo for one last night before the tour ends.  In total, there are 12 days, 11 guided shore excursions and one country included on this new itinerary. 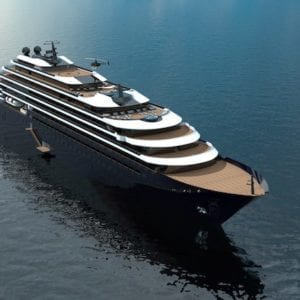