Here’s my favorite quick bite restaurant, New York Deli & Pizza aboard Holland America Koningsdam.  Looks like any ordinary tourist photo and any ordinary pizza joint on a ship.  Except for one thing.

This is the best place on Koningsdam to get breakfast and I don’t mean pizza.  Deck 10 above the pool.  It may be called New York Deli & Pizza but there’s a whole lot more than just pizza.

What’s so secret about this small eatery?  Not much if you’re in the mood for a fresh baked, easy-on-the-ingredients type of pizza.  But it’s here that you can get an honest to goodness bagel, lox and cream cheese breakfast.  There’s red onions and capers too.  Best of all, there’s cappuccino!  Or latte or espresso.

A little about Lido

After all these years, I’ve grown weary of fighting the Lido Buffet crowds in the morning on any cruise ship.  The bad news is that it seems like everyone on the ship is there at once.  The good news is that Holland America has their own health trick: turn the serving spoon hands away from the hungry hoards.  You are actually served.

I’ve never encountered this on any mass market or premium level cruise ship.  Okay…maybe if there’s an outbreak of norovirus, it’ll happen.  On this two-week crossing aboard Koningsdam, the serving spoons were reversed the entire time.  It was fabulous from a health standpoint and I don’t think anyone was upset by it.  Better safe than sorry.  But I digress.

Rather than fight the morning breakfast crowd, and with my love of starting my day with a cappuccino or latte, I tried New York Deli & Pizza.  I’m not sure how I found this place but I’m thrilled I did.

It was unusual for me to find anyone else there between 8:30am and 10am. No waiting, no crowds or elbowing for a better place in line.  That kind of conduct is unusual aboard any Holland America ship, but still it could happen.

About the bagels.  Of course they’re not fresh out of the boiling water as in Manhattan, Chicago or Montreal.  You’re a thousand miles and more away from land.

But these bagels, sesame, plain, honey wheat, poppy seed, asiago, onion and everything, when toasted, we almost as good as a hot, boiled bagel from home.  And no breakfast crowd here.

If I remember, cappuccino was $3.95.  One was not enough.  Half-way through the cruise, I realized I could get nearly twice as much in the cup if I switched to a latte, which I did.

New York Deli & Pizza is only offered (so far) on Holland America Koningsdam and Nieuw Statendam.  On all other ships, it’s just pizza, salads, subs and desserts.  All ships offer late night snacks to enjoy at the on-deck movie.

All food at Koningsdam New York Deli & Pizza is complimentary.  This includes pizza, salads, subs, snacks and desserts.  Only specialty coffees are additional.

And now you know. 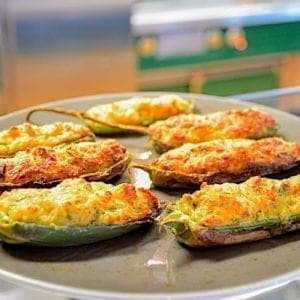 How to Make Jalapeño Poppers From America’s Test Kitchen