Gondolas and canals. Romance and intrigue.  Mystery and magic, Venice, Italy has it all.  But there’s one major change for passengers that hope to cruise past Piazza San Marco.

As of July 2021, cruise ships weighing over 25,000 tons are now banned from using the Venice Cruise Port.  This means that the view of sailing past iconic St Mark’s Square, and into the narrow Giudecca Canal is over.

With cruise ships will no longer able to dock in the city-center port, they’ll be rerouted to the mainland and to the industrial port of Marghera.

This creates an entirely new set of directions to get to the Venice city-center, airport, train station and the other embarkation ports.

There’s not much more to say about this iconic view in Venice.  Simply amazing.

How to Go from Porto Marghera Cruise Port to Venice

Porto Marghera is where almost all cruise ships will have to dock when visiting Venice.  The new law forbids cruise ships from sailing past Piazza San Marco to or from the city cruise port.  This could cause your few days in Venice before or after your cruise to be a little more complicated.

The good news is that there’s a train at Porto Marghera that will whisk you into the heart of Venice at Santa Lucia train station, in just seven minutes.  Another reason to make sure that you pack light so you can manage to haul your suitcases.

Once you arrive at Santa Lucia Station, this is when you need to know how to get around a city that doesn’t have any street transportation.

Most people fly directly to Venice for either their vacation or to board a cruise ship.  Others may opt for a river cruise Or like me, spend a night or two in Paris and then take an overnight train from Paris to Venice.

It’s a memorable sight as your train slowly crosses the Venice Lagoon and the Venetian skyline appears on the horizon as you enter heart of this island-city.

Getting Between Porto Marghera, Santa Lucia Station, Airport and Hotels

Although the new big ship cruise port in Marghera isn’t very pretty or scenic, it is easier to get into Venice with only taking one train and you’re there.

But first, there are some basics to learn.  Knowing the difference between a vaporetto or private water taxi is crucial.  Riding in a private water taxi, in my opinion, something everyone should try at least once.  It’s expensive as a solo traveler, but I would do it again without hesitation.

Difference Between a Vaporetto and Water Taxi

This used to confuse me and I’ll clarify for you.  Think of a vaporetto as a public bus on the water. There are two companies that operate vaporetti (plural for vaporetto); ACTV and Alilaguna.

ACTV is best for traveling around Venice and the islands.  Alilaguna, as far as cruise passengers are concerned, is mainly for connecting between the airport and cruise port. Links to both companies are at the bottom of this article.

If you want to avoid crowds and glide through the canals on your own private “yacht” then opt for the more expensive water taxi.

Think of these as land-based taxis back home. This is your best option for early morning flights TO the airport from your hotel. Yes, there is rush hour on the canals.

First view of Venice as you exit the Santa Lucia train station.

If you’re booked on a very small ship or taking a river cruise from Venice, this is still where you’ll board the ship.

Going from Santa Lucia Station may seem daunting but it’s actually easy.  You can even walk part of the distance if your luggage isn’t too heavy.

There are a few choices to reach the nearby Stazione Marittima (former large ship cruise port).  Remember, as of July 2021, ships over 25,000 tons are not permitted to dock here.  They are now rerouted to Porto Marghera, an industrial port.

Once again, if you’re on a very small ship or river ship, this is where those ships will dock.

Take a Vaporetto Part of the Way

Transportation to Your Hotel

Whether you arrive by air or train, the public vaporetti (plural for vaporetto) and private water taxis are waiting to take you to your hotel as soon as you step out of either terminal. Here’s where it gets tricky and a little preparation can go a long way.

Remember, there are only two ways to get around Venice: by foot or by boat.

Most important: pack light.  The less luggage you have to haul around, the happier you will be.  It’s probably more daunting to arrive into Venice by train than depart.  And getting to or from the main cruise port, Stazione Marittima, is an experience worth planning in advance.

If you’re arriving into Porto Maghera, it’s easier to get to the city center, as I mentioned earlier in this article.

At the Stazione Marittima Cruise Terminal via my water taxi. You won’t see these big ships here anymore.

You can hire a private water taxi (90 € or more) or hop aboard a public vaporetto to travel between Santa Lucia train terminal and either of the two cruise ship ports.

It’s the walk between where your water vaporetto or water taxi docks, at either Venice cruise port – the larger Stazione Marittima cruise terminal or the adjacent smaller San Basilio port, that can be a potential nightmare if you’re not prepared.

If you are lucky and your smaller ship is docked at San Basilio, you are a short walk along a paved path to the San Basilio vaporetto and water taxi station.

It is likely, when docked at San Basilio, that your ship will run a 2-minute shuttle bus ride between the ship and the San Basilio water taxi/vaporetto floating station. This was the case on my recent Viking Star cruise from Barcelona to Venice.

From your hotel or train station to your ship at Stazione Marittima, luggage is usually checked right where either the water taxi or vaporetto lets you off, assuming that cruise ship representatives and luggage trollies are present.

On a cruise a couple of years ago, arriving by private water taxi, I was able to check my biggest suitcase to send to the ship. But because I had a case with my computer, another packed full with camera equipment and yet another small case with makeup/breakables.

I ended up pulling three small but very heavy two-wheeled suitcases for what seemed like miles.

My pre-arranged private water taxi to get to the cruise terminal.

Arriving or Departing From the Airport

You’ll still have to get to or from the airport (mainland) and Venice Island.  If arriving, look for signs to the water taxis and vaporettos just outside the arrival area and it’s the same procedure as above at the cruise port.

Take a public vaporetto (water bus) to your hotel or cruise ship if you don’t have much luggage.

Getting to/from Your Hotel in Venice

Many times for new visitors, finding their hotel means walking and pulling luggage on cobblestones, up steps and over bridges and sometimes up several flights of stairs if you’ve chosen a penzione.

The #1 vaporetto runs between the cruise terminal, the train station and St. Mark’s Square and other stops in-between which may be convenient to your hotel.  Note: Your vaporetto may be crowded so be prepared.  This is why I love the private water taxis.

Note:  Since private water taxis can hold up to six-eight people, you could ask others in the water taxi queue if they’d like to share, provided of course that you are all headed to the same destination.

Entrance to the Hotel Danieli for the private water taxis.

Believe it or not , there are land porters for hire to haul your luggage from point to point.  Either phone or ask your hotel concierge for a list of companies.

READ NEXT:  My review of the glamourous Hotel Danieli in Venice

They’re expensive but might be worth it. This saved my sanity when I had to change hotels from the Hotel Danieli to the Westin Europa, on totally opposite sides of St. Mark’s Square.

Yes, people carry their luggage up and over bridges to get to their hotels.

You can buy your water bus (vaporetto) pass before you leave home.  Simply visit the ACTV website  where you can view all of the options.   This will cost about 7.50 € pp and it makes several passenger stops. This is not the private water taxi service. For that, you look for a private water taxi at the dock or arrange it online or through your concierge.  It’s at least 90 € but it’s the entire boat.

Alilaguna operates several lines, noted by their color.  But for going from airport to cruise port, they depart every 15 minutes.  Click the link for schedules and to purchase online.

Some private water taxis add a mandatory meet and greet at the train station and charge for the service.

But the upside is that you don’t have to pull/push/drag your luggage through the station, down the steps and through the crowds at the waterfront and then determine which water taxi is the one you reserved.

You can reserve a private water taxi at various places online.

Cruise ships on the Venetian Lagoon in Venice are gone.  Conservation groups finally won the battle of the behemoths, citing erosion and pollution as the two main reasons.

You can’t blame the Venetians for their drive to preserve this easily flooded and slowly sinking magnificent island. 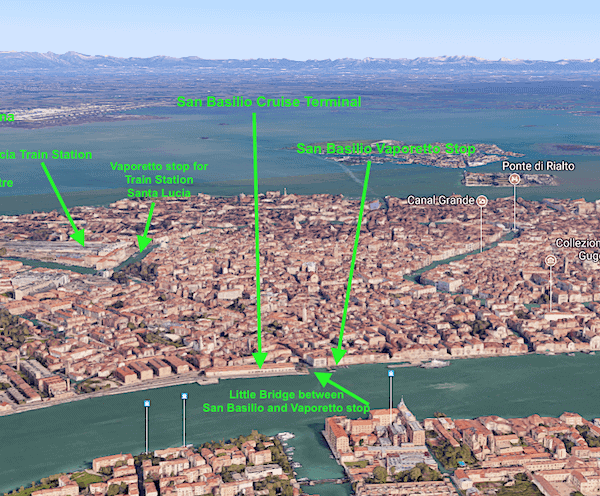 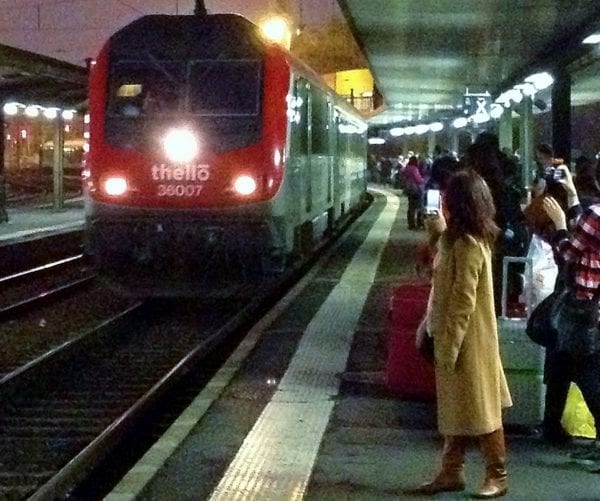 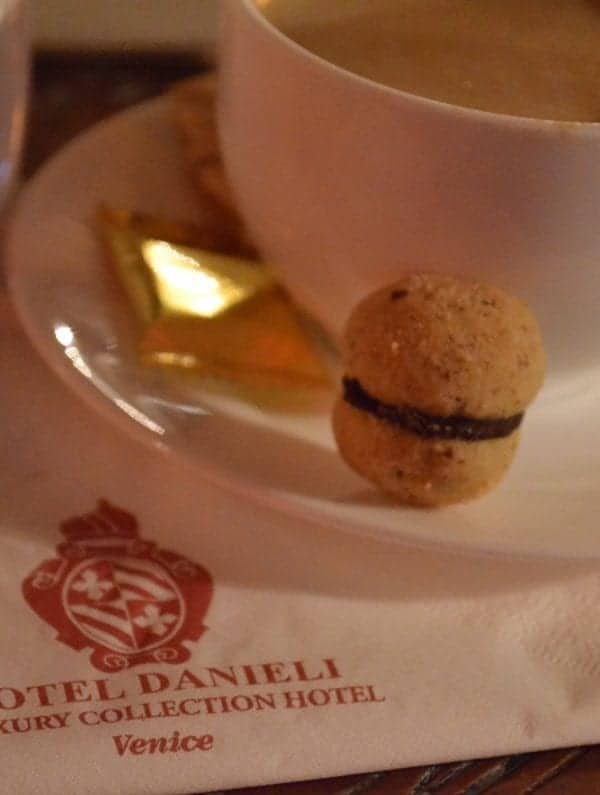