The journey to begin my CroisiEurope Rhine river cruise aboard Douce France, began with a fourteen-day, transatlantic crossing from Fort Lauderdale to Rome. Two moonlit nights at Rome’s Westin Excelsior, a way-too-early 8am departure from Rome Termini; one train to Milano and another to Basel.

Though tired, I was anxious to hit the ground running when we docked at Civitavecchia, the port city for Rome.  Unfortunately, the car service that I had arranged to drive me to my hotel in Rome had other ideas.

Nearly alone, I paced impatiently and eyed every sleek black car that entered the once-crowded port pickup area.  I sent countless texts and phone calls to the driver and the company but no response.

With only five other passengers waiting for their car service to arrive, I mustered the courage to approach a couple to see if I could share their ride into Rome.  Luckily, they were headed to a hotel in Rome and not the airport.  Happy to share the expense, their driver pulled up and we were on our way to the Eternal City.

Two nights isn’t enough time for Rome, but I was on a tight schedule.  With an early 6am train, room service was imperative.  All I wanted was a pot of American coffee. Steaming hot and carefully poured, I then unwrapped a croissant from yesterday’s breakfast and all was good.

Time to head to Basel for my CroisiEurope Rhine river cruise, I hopped into a taxi to Termini. With 20 minutes to spare, I was standing underneath the station’s electronic departures board.  Suddenly, my train’s platform number appeared.

The anxious crowd bolted for the assigned platform; everyone wanted to be first to board their assigned coach.  My mad rush is to be able to find a storage shelf for my larger spinner bag and the “secret” stowaway place for my computer case.  Mission accomplished, I settled into my leather seat, excited for that first slight jolt when the train engages and the journey begins.

A quick train change in Milano (doing the same departure board watch) and in three hours, our Swiss train pulled into Basel, right on time.

The Basel train station is very busy and a bit odd.  Off the train, you take the escalator up, walk a few yards and then take the escalator down to street level.  There is also an elevator, but not located near our train from Milano.

When I finally settled in onboard Douce France, I was tired and very hungry.  On long in-transit days with multiple trains, I don’t eat or drink very much and looked forward to the Welcome Aboard drink and snacks.

The Welcome Aboard presentation was to begin about 6pm. I brought my laptop with me to pass the time until everyone was onboard and the official start of our river cruise.

The contemporary, mauve-colored lounge filled quickly and champagne cocktail was handed out as you entered the room.

Sylvie, our cruise manager began to speak and it was all in French.  Seriously. But before panic set in and my high school French classes were but a tortured memory, Sylvie clearly spoke an abbreviated version for the 10 of us English-speaking guests.

This isn’t my first rodeo with CroisiEurope.  It’s almost a French immersion cruise without the need to take a class.  The food has a distinctive French flair, from fois gras and French wines to ratatouille and roast canard.

While CroisiEurope seems to attract a majority of French-speaking passengers, it’s priced right to appeal to budget-conscious travelers from around the world.

On board Douce France, the passenger mix also included eight Spanish-speaking folks and a couple from Portugal.  The balance of guests were from France. Announcements were made in four languages.

The Captain, Chef and other staff members were introduced (in three languages), we lifted our champagne flutes for a bon voyage toast and it was time for dinner.

On CroisiEurope, English-speaking passengers (ESPs) are all seated together in the front corner of the dining room.  It’s been like that on my past two CroisiEurope cruises so I’m guessing that’s the way its done.

Of our 10 ESPs, there were two moms and daughters, two women traveling together from New York, one couple from Kansas City, a solo woman from Maine and me.  Except for the two daughters, ages ranged from a mid-forty mom to 81-years.  As I looked around the dining room, an average age range for all was probably 65 – 75 years.

TIP of the DAY onboard Douce France:

With a late boarding time for Douce France, I’d suggest that you don’t arrive too much before 6pm.  The ship won’t be ready to take on passengers and there are no mid-afternoon snacks available in the lounge. Better still, arrive the day before, request late check out at your hotel and store your luggage with the bellman until it’s time to arrive at the ship.

Tomorrow is free time to explore Basel on your own or with a tour.  Passengers from North America have already paid for and chosen their tours when they booked their cruise.

The afternoon should be interesting and something I have not done yet…a tour of the Rhine Falls.  Stay tuned for tomorrow’s daily cruise brief. 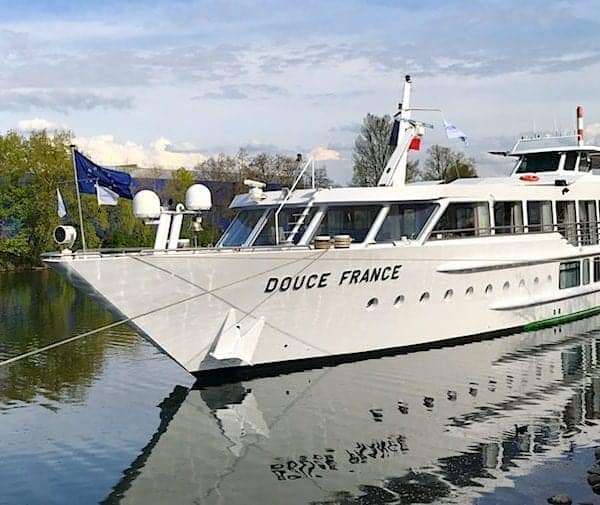 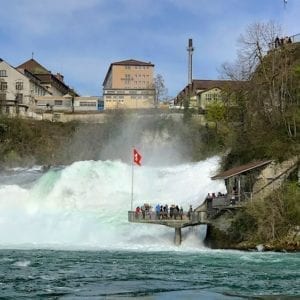