It was only a few weeks ago that this 1,964-passenger cruise ship, Holland America’s Westerdam, was denied docking in five nations in Asia due to coronavirus fears.

Finally, Cambodia allowed the ship to dock.  When the plane carrying the first round of cruise passengers landed in Malaysia, one woman tested positive for coronavirus.  The next two tests said she was negative for the virus; the initial test was a false-positive.  The confusing story made news around the world.

When Westerdam is expected in Alaska

According to the article in the Anchorage Daily News, the Westerdam is scheduled to dock in Juneau sometime this month, around March 22nd.

At the time of this writing and checking the ship’s location on CruiseMapper.com, Westerdam is currently cruising between Japan and Guam, en route to Hawai’i.

The port that Westerdam will stop at in Hawai’i wasn’t revealed.  Though already tested negative, it is expected that the entire crew will again be tested for COVID-19 coronavirus, before they can disembark in Hawai’i.

The Associated Press reported that Rorie Watt, Juneau City Manager, confirmed with Holland America on Monday, March 2, that the Westerdam would dock in Juneau after a stop in Hawai’i.  All Holland America sailings in Asia were canceled as of last month.

At this time, Alaska is thought to be free of coronavirus.  Juneau’s city manager said he is “not concerned” about the Westerdam docking in Juneau, nor the crew coming ashore and heading to the airport to fly home.

“By the time it arrives in Juneau, the crew essentially will have been quarantined on the ship, with no entry or exit of other people for the better part of a month,” Watt said.  He continued, “They probably are going to be doing maintenance projects and giving crew some shore leave. I would imagine the crew’s probably pretty tired and stressed out from the whole situation.”

Nearly two months ago, the cargo plane carrying the first American passengers evacuated from the virus-stricken epicenter in Wuhan, China, landed in Anchorage Alaska.  The airplane was sequestered to a seldom-used airport terminal and no one was allowed to leave the plane.

Holland America Line did not immediately respond to a request by the Associated Press for comment. 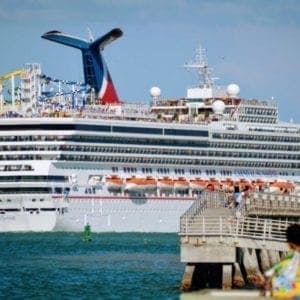