Holland America Westerdam had been idling off the coast of Japan for over a week amid fears of the novel coronavirus.  Nowhere to turn and no port to dock.

How The Westerdam Saga Began

On February 1, Holland America’s Westerdam untied the ropes and departed from Hong Kong on a 14-day cruise.  The voyage was supposed to end in Yokohama, Japan on February 15.

However, as the coronavirus became more and more widespread, including new cases cropping up in Hong Kong, Japanese authorities suddenly decided that they would not allow the ship to pull into port.

A week ago, the Japanese government notified Holland America Line that Westerdam, despite having no passengers with coronavirus, would not be allowed to call on any Japanese ports.  The original itinerary had planned calls to five ports in Japan; Ishigaki Island, Naha, Okinawa, Nagasaki and Fukuoka, and then on to Yokohama to disembark on February 15.

The 1,455 guests and 802 crew had no idea where they would be allowed to disembark.  The ship was forced to stay offshore along the Japanese coast.

After receiving the notification from Japanese authorities that the ship would not be allowed to dock, the cruise line issued a statement, “Guests on board Westerdam continue to be fully safe and secure. The ship is currently in a holding pattern off the coast of Japan, southeast of Okinawa, while we are working to finalize a new port of disembarkation.”

Westerdam: A Ship In Search Of A Port

Despite negotiations between the cruise line, The Netherlands (where the ship is registered), and the USA, there were now four locations, U.S. Territory of Guam, the Philippines, Taiwan and Japan, that would not allow the ship to dock.  Even though there were no cases of coronavirus detected aboard the ship

Finally, on Feb. 10, word spread that the ship would be allowed to dock in Thailand. It took almost a week, but Holland America Line was finally granted permission for Westerdam to dock and disembark passengers.  With Westerdam passengers having no cases of coronavirus, the ship would now be able to terminate the cruise in Laem Chabang (Bangkok), Thailand on February 13.

From the port, guests would be transferred to Bangkok for their flight home.  Then, without warning, the offer by Thailand for Westerdam to dock was suddenly off the table.

Without warning, Thailand changed its mind and became the fifth nation to not allow the ship to dock at its shores.  The cruise line was once again fervently trying to locate a port that would permit the ship to dock and passengers and crew could head for home.

It’s important to note that during all this time, there were no known cases of anyone onboard contracting coronavirus and the ship was never put into quarantine.  However, the coronavirus incubation time from when the ship departed from Hong Kong had not yet reached the supposed 14-day incubation period.

Shunned, isolated and running low on food, medicine and fuel, Westerdam was a ship without a port.

Cambodia To The Rescue

Then, on Wednesday, word came that Cambodia would allow Westerdam to dock at their shores.  Westerdam is now docked in Sihanoukville, Cambodia, where this cruise ended. The ship arrived early Thursday, Feb. 13 local time and will remain in port for several days pending disembarkation.  Holland America has said that “all approvals have been received and we are extremely grateful to the Cambodian authorities for their support.”

Guests will disembark in Sihanoukville over the next few days and transfer via charter flights to Phnom Penh for forward travel home.  Holland America Line will arrange and pay for all flights home, in addition to the full cruise refund and 100% future cruise credit already communicated.

Future Westerdam sailings are still being finalized.  The latest information will continue to be posted under the News & Travel Advisory section of hollandamerica.com. 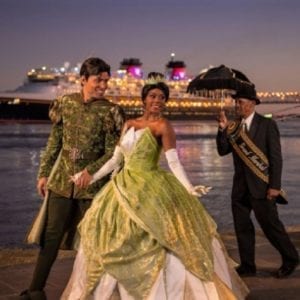