In case you missed last week’s cruise news, maybe out having too much fun over the Fourth of July long weekend, here are the latest happenings in the world of cruising.

Carnival Panorama heads out to sea

Carnival Panorama left the shipyard in Italy last weekend for a brief trip out to the ocean.   In case you didn’t know, Panorama was supposed to be a part of Carnival’s P&O fleet.  When Carnival executives saw how popular the first two Vista Class ships were, the Vista and Horizon, it was decided that Carnival Panorama would instead join the Carnival fleet and become the first new Carnival ship to have a homeport on the West Coast in twenty years.

When Carnival Panorama is completed, the ship will head across the Atlantic to Long Beach, California without any passengers.  After a three-night inaugural cruise, the ship will offer 7-night Mexican Riviera cruises that include Cabo San Lucas, Mazatlan and Puerto Vallarta.

Back in Long Beach, the Queen Mary, now a ship hotel, added a permanent exhibit, “The Cunard Story.”  Partnered with Cunard Line, the ship’s original owner, the show opened on July 5th.  Featured in the exhibit will be its one hundred seventy nine-year history with Cunard Line, and the significance that the ship has played over the years.

‘The Cunard Story’ will showcase ship artifacts, photos and film, and have an ‘immigration salon’ where visitors can digitally explore ancestry databases.

During the ship’s heyday under the Cunard banner from 1936 until its retirement and sale in 1967, Queen Mary carried thousands of passengers across the Atlantic and around the world.

Princess Cruises began the countdown to signal the one-year mark until the launch of Enchanted Princess on June 30 next year, in Southampton.

The maiden voyage on July 1, 2020 will depart the UK for a 10-night cruise to Rome, and other popular western Mediterranean ports.

The new ship will have over 25 dining venues and bars and will offer the use of their Ocean Medallion interactive, wearable device.

MSC just announced that they are now rolling the daily gratuity charge into the cost of the cruise.  But here’s the catch.  It only applied if you live in the UK or Ireland.

So far, no other cruise line has made any such type of announcement.

That wraps it up for Cruise News this week. 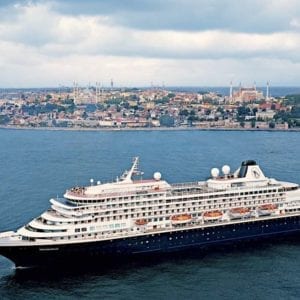