In the past weeks, Norwegian Cruise Line released a preview of their high-energy attractions like the top-deck race track that will extend 13-feet over the edge of the ship.  Also out of the bag is the addition of the largest open-air laser tag course at sea.

Here’s what we know so far about  Norwegian Encore restaurant venues, bars and lounges.

Headlining the list of new restaurants is Onda by Scarpetta.  Scarpetta is an award-winning Italian restaurant based in Miami and Onda (Italian for “wave”) is the signature restaurant’s first cruise ship venture.

Read next: How to Pack for a Norwegian Cruise Line Cruise

In addition to the debut of Onda by Scarpetta, Norwegian Encore will include the most popular restaurants from the Breakaway Plus class.

As on other Norwegian ships post-refurbishment, Norwegian Encore will also feature a full-service Starbucks® licensed store, serving their variety of coffee beverages, pastries, and retail items.

Back by popular demand

Norwegian Encore will feature the most popular Breakaway Plus class’ bars and lounges. From Norwegian Bliss will be The A-List Bar, named in honor of Norwegian Cruise Line president, Andy Stuart.

Plus These Signature Bars

The Waterfront on Norwegian Encore

As on other new Norwegian Cruise Line ships, The Waterfront is a quarter-mile-long promenade around the ship.  Along Norwegian Encore’s The Waterfront will be outdoor dining and lounges aimed to give guests a closer view of the sea.

While not all dining venues can be included, those that will have The Waterfront seating are Onda by Scarpetta, Cagney’s Steakhouse, Los Lobos, The Cavern Club, Dolce Gelato Sugarcane Mojito Bar and Ocean Blue.

As I mentioned, Norwegian Encore will homeport in Miami beginning late November 2019.  The ship will depart every Sunday on seven-night cruises to the Eastern Caribbean.

The first cruise is departs Miami on November 17, 2019 and continues through April 19, 2020.  When the ship’s Caribbean season ends, it will reposition to New York City for summer cruises to Bermuda through November 22, 2020. 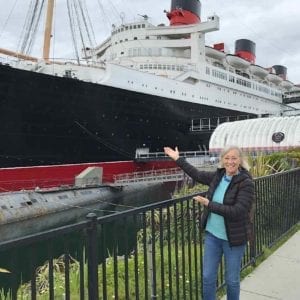