It was an all-too-familiar sight when I woke up yesterday morning.  I pulled open the curtains for an early morning peek at the river. As I watched the mist swirl and rise above the river, I knew something was not the norm.

Trees along the shore were half-submerged in the river. The Danube’s current rushed past us at breakneck speed, on its journey to Black Sea. I wondered why our captain had pulled the Viking Lif as close to the shoreline as possible and we were at a standstill.

Life in the fast lane.
Then it appeared; one of those hulking, massive barges laden with cargo, zoomed past us. Good thing we were off to the side.  The barge took up the entire middle of the river.  It’s one thing to judge speed when two moving ships pass each other. But when your ship is stopped and the oncoming vessel seems to fly past, you know a raging current is the culprit.

I remembered the sundeck on the Viking Lif had been closed for at least a day. Guardrails around the sundeck’s edge were disassembled and laid flat. The captain’s wheelhouse was hydraulically lowered.  All done to fit under the old bridges. With high water and low bridges, river ships barely pass underneath, sometimes within inches scraping the bottom of the bridge.

So much for unpacking once.
It was sometime after breakfast that we received news from our cruise director. Due to high water on the Danube, our riverboat could probably not fit under the bridges north of us. We’d been forced to dock in the city of Duggendorf, some 80 miles from our intended destination of Regensburg.  Updates to follow.

By lunchtime, it was settled. Our ship could go no further. We would have to pack up and leave the Viking Lif the next morning.

Buses would take us three hours upriver to Nuremberg. There, we’d board the Viking Skadi, a slightly older ship than the Lif. It so happened that the Skadi was heading in an opposite southbound journey from ours; Amsterdam to Budapest. Due to the river conditions, the Skadi was sidelined in Nuremburg.

None of the Lif’s 181 passengers seemed particularly upset. For the last seven days we’d been surrounded by one of the most friendly and conscientious crews that I have ever experienced. Their cheerful attitude set the tone for the voyage. I’m sure this must have helped ease the anxiety and stress of suddenly having to pack up everything and bolt.

So here I sit on a motorcoach at 8:30am Saturday morning, heading towards Nuremberg.

To break up the monotony of the journey (and perhaps give our new ship’s crew a chance to prepare for our arrival) Viking Cruises arranged a mid-journey stop at Walhalla. This enormous neoclassical memorial, resembling the Greek Parthenon, stands high above the Danube and contains 130 statue busts of noted Germans, from Copernicus to Mozart and Albert Einstein.

With this diversion complete, we were back on the bus for a 90-minute ride to Nuremberg and meet the Viking Skadi, scheduled to arrive at the ship for a noon lunch. Like clockwork, our four busses pulled up to the Skadi on time. Everyone swarmed off the busses and as on all cruises, made a beeline for the dining room.

On the road again.
Within an hour, everyone was off the ship and back again on the busses for the scheduled tour to Nuremberg. I stayed on the ship to unpack, relax for a minute and finish this article.

Really. Who would think that a hurricane in the Atlantic could hook around over the UK, take a southeast turn and bring rain, wind and flooding to central Europe. That’s part of the adventure of being on a European River Cruise. 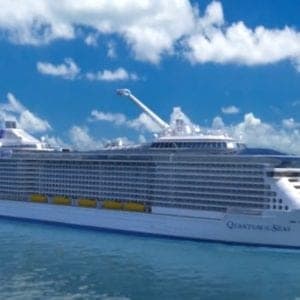