The Baltic Sea is first body of water in the world that will ban cruise ships from dumping their waste water while at sea.

Apparently, the Baltic Sea is one of the most polluted bodies of water in the world.  That’s not to say cruise ships aren’t partly responsible.  The main culprits are agriculture, fertilizer runoff and urban waste.  Yuk.  Cruise ships are the fourth cause of pollution in this northern European sea.  And it’s easy to understand why if you read the facts.

Feargus O’Sullivan of CityLab.com notes that “according to Friends of the Earth, a single week’s voyage for a large cruise ship creates an estimated 210,000 gallons of human sewage and one million gallons of grey water from showers, sinks, laundry etc.”

Beginning in May 2019, new cruise ships will have to either leave the Baltic with all the human sewage and grey water it accumulates or pump it away on land to await treatment.  Older vessels will have until 2021 to adapt to the change.

Last year, Helsinki came up with an alternative incentive plan for cruise ships until the 2019 ban takes effect.  The Port of Helsinki offers cruise ships a 20-percent discount rate on the port’s waste water emptying service.  From the port of Helsinki, the black and grey waste water is sent to a land-based sewage water treatment plant in Vikki, Finland.

That’s where the discount comes into play.  All ships have to pay a fee for the water treatment process even if they dump offshore.  By getting the discount, Helsinki hopes that rather than pay the full price, from now until 2019, cruise ships will take advantage of the savings and also use the service and not the ocean.

Legislation now states that international ships may dump untreated waste water into the sea as soon as they are at least 12 nautical miles from shore.  Sewage that has been treated on the ship (grey water) may be unleashed from only three miles out at sea.

Says Helsinki Port Master Antti Pulkkinen, “Last year 80 percent of cruise ships took advantage of the service. The Port of Helsinki has tried to do everything in its power to help the Baltic Sea.”

Looks like Helsinki is taking the lead in preventing further pollution of the Baltic Sea. 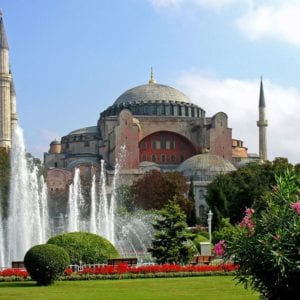