The new river ship will be built over the body of an existing casino river boat, the Isle of Capri, that was docked on the Mississippi in Bettendorf, Iowa. The hull and power plant will remain and three new decks will be built, with the iconic “wedding cake” paddle wheeler design.

There will be two dining venues, the Grand Dining Room and the Grill Room, both with open seating.  Dining will feature regionally inspired cuisine similar to that of their signature ship, American Queen.

America Duchess will sail along the Mississippi from New Orleans to St. Paul, Minnesota and include the Mississippi tributaries as well.  An exciting innovation will be the overnight stays in ports like Nashville plus round-trip itineraries from Nashville and New Orleans.

Chicago will also be included as a departure point, with guests from the Windy City boarding the American Duchess in Ottawa, Illinois.  Also, those living near Nashville will also have a close boarding opportunity.

When the new American Duchess begins cruising, the ship will join American Queen and American Empress meandering along America’s rivers. American Queen Steamboat Company will then be able to offer two distinct paddle wheelers on the Mississippi River and tributaries.  The American Empress plies the Columbia and Snake Rivers along the Oregon and Washington borders in the Pacific Northwest. 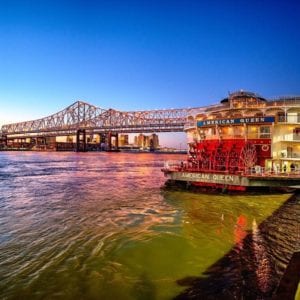