American Constitution, the newest ship in American Cruise Lines fleet, has completed its inaugural sailing.  The ship sailed the Chesapeake Bay on a new 10-night itinerary, named the American Revolution.  The 175-passenger America Constitution departed from Baltimore on April 18, 2018.

“American Constitution has been exceptionally well received and all the spring 2018 American Revolution cruises are already sold out,” a company official said.

One of the highlights on this itinerary, American Constitution docked at The Wharf, inside the District of Columbia. This was the first time a cruise ship has called on D.C.’s Southwest waterfront in over 60 years.

While docked in Washington, D.C., shore excursions included visits to the “Historic Triangle,” Williamsburg, Yorktown and Jamestown.  Tours of Washington were also included.

Featured on the inaugural cruise was Dr. Harold Cones, emeritus Professor of Biology, Christopher Newport University. An expert naturalist, historian and writer, Dr. Cones provided onboard enrichment lectures about less well known aspects of American history and the historical sites throughout the region.

Onboard cuisine included Maryland Blue Crabs, while the new ship sailed through the Blue Crab Capitol of the World.

After a spring season of American Revolution cruise itineraries, American Constitution will relocate to northern New England for the summer and their New England Lobsterbake cruises.  In the fall, the ship will cruise on the Hudson River.

American Cruise Lines cruises the rivers, coastal and inland waterways of America.  With 10 ships and over 35 itineraries that visit 25 states, American cruises New England, Alaska, the Pacific Northwest, the Mississippi River system, and the Southeast. 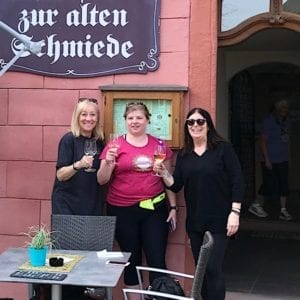