It was only four days in Switzerland but plenty of time to get a feel for two of this country’s most popular (and expensive!) cities.

It’s been several years since I’ve included a pre-cruise land extension in my travels, so I decided it was time.  Two nights in Zurich and two nights in Lucerne.

After a smooth 14-day transatlantic crossing aboard Holland America’s new Koningsdam and three nights in Rome at my friend Anna’s B&B, I boarded a train to Milan and another to Zurich.  Three and one-half hours each, but both seemed to take no time at all.  Plus, the scenery from Milan to Zurich was spectacular.  The super-fast SBB train went through the brand new and longest train tunnel in the world, slicing through the Alps in 22 minutes.

From Zurich train station it was a 10 minute taxi ride to our hotel, Steigenberger Bellerive.  For an additional cost, you could upgrade your hotel room from a city/industrial view to a beautiful view of Lake Zurich.

The first night of any pre-cruise land package includes a meet and greet with your river ship’s cruise manager, who will be with you the entire time, on land and river.  Monika, our cruise manager for AmaKristina, spent a quick few minutes to explain what we’d be doing for the next four days, a rundown of the optional (additional fee) tours and free time.

Bright and early the next morning, after the included buffet breakfast, most of the group (about 45 people) opted for the free city tour via motor coach.

And…almost everyone planned to do the optional tour to the Rhine Falls. A five-hour tour included a boat ride to the face of the falls and a visit to the small town of Stein am Rhein.

One of my favorite cities in Europe for its beauty and charm is Lucerne.  Surrounded by the jagged edged Alpes, Lucerne is part story-book, part tourist town.

A two-hour bus ride brought us our hotel and one of my favorites for this city; the Hotel Schweizerhof. The best optional tour, which I totally regret not doing, was a cable car ride, called a “CabriO”, to the summit of Mt. Stanserhorn.  Don’t miss it.

The morning of the fourth day, all packed up, our luggage was outside our doors by 8am.  A scenic two hour drive to Basel and our awaiting river ship, AmaKristina.

If you’re planning an AmaWaterways Rhine river cruise between Basel and Amsterdam and if it’s in your budget, I highly recommend the add-on pre-cruise land extension in Zurich and Lucerne. 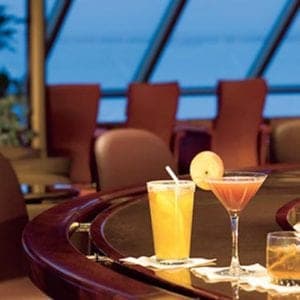