Until my visit to Kinderdijk, the closest I’d been to a windmill was a cellophane-wrapped box of windmill cookies.  So when I had the chance to visit a centuries-old working windmill village with Viking River, off I went.

Our riverboat, the Viking Jarl, made an early morning approach into a chilly, fog-shrouded Kinderdijk. The sun was desperately trying to break through the mist.  Apparently, an early September in Holland didn’t guarantee a warm, autumn day.

Kinderdijk was the first stop on my Viking River Cruise from Amsterdam.

There they stood; 18th century sentinels, keepers of the flood gates.  Most people don’t know this but much of Holland is below sea level. Kinderdijk, in particular, is over 20′ below sea level.

When the Dutch finally realized that to live in this low-lying area, something had to be devised to keep the flood waters away.  In 1738, the clever Dutch designed eight of the nineteen mills and a series of canals and drainage systems. A successful water management system would alleviate flooding.  The remaining eleven windmills were added over the next hundred years.

A total of nineteen working windmills were constructed. Built closer together than in any other part of the Netherlands, these windmills were essential to driving the pumps that directed the waters away from the village.

Without getting too technical, the Kinderdijk windmills generated pumps that sent the overflowing water in the lowest storage basins to higher ones that could contain the overflow. The water would then be directed into the River Lek and eventually find its way to the sea.

In 1997, the windmill complex at Kinderdijk was designated a UNESCO World Heritage Site.  As part of this honor, all of the nineteen windmills must be preserved in their original state.

The windmills are numbered, 1-19 and the number 2 windmill is now the Kinderdijk Windmill Museum. The interior is a scene frozen in the 1950s, depicting what it was like to live in a windmill.

Those of us who were fairly sure-footed climbed the steep stairs to the third floor, and were treated with an exceptional view of the entire windmill field.  It was the getting-down part that was tricky; the only way to the ground floor was by a narrow ladder.  But I made it back down as did everyone else.

Onto the windmill workshop where a guide explained in great detail how a windmill was constructed, the “signals’ that the caretakers used to communicate with each other and how they would repair the sails and blades.  We glanced at weathered-looking windmill design plans that lined the walls as the guide explained how windmills work.

It was time to leave to head back to the Viking Jarl.  I lingered a bit longer, allowing myself the luxury of being the last in our group.  Over the years, I’ve learned that some of the best photos happen when you look back at where you’ve been.

Of course, in Kinderdijk, you had better look in front of you, too, so as not to careen into a group of cyclists, as I almost did.

If you happen to have a few days in Amsterdam, you can reach Kinderdijk by public transportation.  Your hotel or of course Google can give you up-to-date information.  It’s extremely interesting, serenely beautiful and a wonderful peek into life from centuries ago.

In disclosure, I was a guest aboard Viking Jarl.  However, as always, all opinions are my own.  So are the photos. 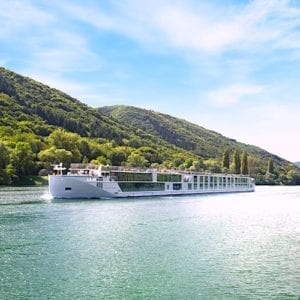