U by Uniworld, Uniworld River Cruise’s spin-off seemed like an interesting idea. Aimed strictly at guests under 45 years old, their redesigned river ships Named A and B, were launched with a mindset to mimic that of millennial-age passengers.

Apparently, that didn’t work too well.  So even before the first official cruise on April 14, the maximum age has disappeared.  We baby boomers are welcome!

When Uniworld announced that it was taking two of their ships into refurbishment and creating the new U by Uniworld river cruise experience for 21- to 45-year olds, it might have seemed like an interesting concept.

Read next:  Uniworld adds another ship for Seine cruises

Uniworld is under the same corporate ownership (The Travel Corporation) as Contiki Tours.  Contiki has been in the travel game for decades, selling tours around the world specifically for the exact same age range, 18-35 and with huge success.  Maybe U by Uniworld thought they could be a water-based version of Contiki and offer the equivalent of The Travel Corporation’s time-tested, young-person’s land-based tour company.

But it just didn’t sell.

The two sleek black-hull river ships, named A and B, will remain the same.  They’ll still have several bunkbed style cabins, a “silent” disco, a casual dining room and a more minimalist look than what you’ve come to expect on a European river ship.  Shore excursions will be more immersive and active rather than city motor coach tours with photos stops.

Personally, and I’ve said this many times, I think river cruise lines need to market to the real next generation of river cruisers; the 35-50+ year-olds.  Not jump over that demographic and go after the millennials.  It’s just not their thing.  But you just don’t know til you’ve tried. 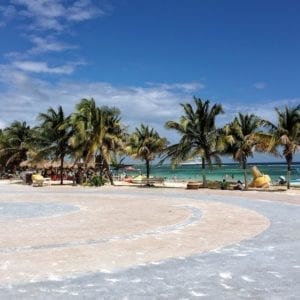