Together, they will take on the refurbishment and enhancement of the Grand Lucayan Resort. On the heels of that massive project will be the expansion and redesigning of the existing cruise terminal at Freeport Harbor.

This isn’t the first collaboration between the Mexican port development company and Royal Caribbean.  Together as Holistica Destinations, they’ve been developing cruise ship ports into cruise entertainment destinations for years.  The cruise ports Holistica has developed, own and operate include the expansive cruise complex at Costa Maya, Mexico; Port of Roatan, Honduras; and Puerto Plata in the Dominican Republic.

What you’ll find at the new destinations in Freeport

Now that ownership of the old Grand Lucayan Resort is final, the first phase of the refurbishment and enhancement will be to convert the existing beachfront hotel into a world-class resort destination.  The resort will have 526-rooms, a Bahamian shopping “village” area and a spa and wellness center.

Family-friendly water activities will include a sprawling water and adventure theme park, and challenging zip lines and off-roading.  There will also be a 40,000-square-foot convention center plus several restaurants and bars with entertainment and nightlife.

Following the resort make-over, the next phase moves to the cruise terminal at Freeport Harbor.  Here, nine miles west of  the Lucaya property, Grand Lucaya Resort, they’ll build Harbour Village at the port.   Both cruise ship passengers and hotel guests will find a selection of restaurants, shopping and a stepping off point for shore excursions.  As at other Holistica Destinations cruise ports, visitors will be able to experience the sights and sounds of the island.

READ MORE:  My Review of Royal Caribbean Radiance of the Seas

The new expanded port will be able to accommodate the largest cruise ships in the world.

“Great destinations are a vitally important part of the recipe to deliver unforgettable cruise vacations. With our partnership in Holistica Destinations, we believe that this new development will create a world-class experience for guests and deliver renewed hope for the rebirth of Grand Bahama,” said Michael Bayley, president and CEO of Royal Caribbean International. “We thank the government of The Bahamas for its continued partnership and shared vision to create a premier attraction which will be a catalyst for economic growth in the destination.”

In conjunction with Bahamian companies, additional development for Freeport will include a multi-purpose transportation hub.  From here, guests will have access to  water ferries and ground transportation that includes buses, vans and jeeps.  Holistica Destinations project is expected to create 3,000 jobs during the major construction and operation periods.  It’s predicted that this new venture will bring over two million cruisers and travelers a year to Grand Bahama Island.

The expected opening date is aiming for Winter 2022. 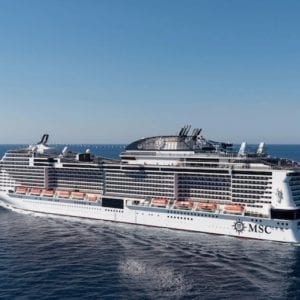 Cruise Ship Not Allowed to Dock at Two Caribbean Ports