Under the Carnival Corporation umbrella, the plan was to remove the less efficient ships in any of the corporation’s brands. It’s a slow bleed.

In a past life, Pacific Princess started out in 1999 as R3 for Renaissance Cruises.  In 2002, after the demise of Renaissance, the ship joined the Princess Cruises family.

RELATED:  My Princess cruise to Hawai’i, some 50 years later.

With an avid following of passengers, the 670-passenger Pacific Princess sailed more than 1.6 million nautical miles and 11 World Cruises.  When Pacific Princess began its first cruise season to Alaska in May 2003, The Love Boat’s “Captain Stubing” and Princess Cruises Ambassador Gavin MacLeod were on the ship’s navigation bridge as the vessel sailed under the Golden Gate Bridge.

“Pacific Princess holds so many memories and cherished experiences to all who sailed upon her,” said Jan Swartz, Princess Cruises president. “Pacific Princess offered a traditional style of cruising to unique destinations. While it’s difficult to say goodbye to our ‘Love Boat,’ our World Cruise and exotic itineraries continue onboard our Medallion Class-enabled Island Princess and Coral Princess, featuring the best Wi-Fi at sea, allowing guests to keep in touch with loved ones and share vacation memories along the way.”

In celebration of the 50th anniversary of Princess Cruises, on December 3, 2015, Pacific Princess staged a throwback cruise celebration.  The company recreated the cruise line’s very first itinerary to the Mexican Riviera. On board for this event was the cast of “The Love Boat.”

Fans of the show will remember Gavin MacLeod as Captain Stubing, Fred Grandy as Gopher, the chief purser, and Ted Lange was Isaac, everyone’s favorite bartender. Also on board was Bernie Kopell who played Doc, the ship’s doctor, Lauren Tewes as cruise director, Julie and Jill Whelan who, in later episodes joined the cast as Vicki, the captain’s daughter.  Everyone onboard celebrated the influence that the T.V. show had on Princess Cruises’ five-decades-long history.

Guests booked on Pacific Princess and travel agents will be notified of the cancellations.

You have the option to receive a refundable Future Cruise Credit (FCC) equivalent to 100% of the cruise fare paid PLUS an additional non-refundable bonus FCC equal to 25% of the cruise fare. The higher-value FCCs can be used on any voyage booked by May 1, 2022 and sailing by December 31, 2022.

Alternatively, you can request a refund for all monies paid on your booking through an online form at Princess Cruises. Requests must be received by February 28, 2021, or you will automatically receive the applicable higher value option listed above. 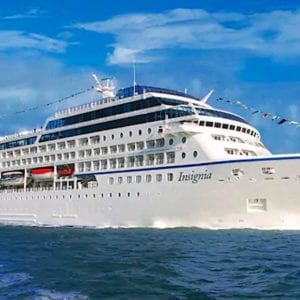