A series of Norwegian Cruise Line wine cruises for 2017 and 2018 were announced along with the celebrity wine hosts.

Taking place aboard Norwegian Dawn and Norwegian Escape, guests will be able to wine and dine with noted winemakers and wine industry experts.  There will also be wine-themed enrichment experiences onboard led by the winemakers themselves.

The next five wine cruises were announced during the first Winemaker Dinner cruise of this season aboard Norwegian Escape, led by Antonio Hidalgo, President of Bodegas Hidalgo La Gitana. Hidalgo represents the 8th generation of the sherry winery, family owned and operated since 1792.

“Given the incredible reception of Michael Mondavi’s past visits aboard our ships, we are excited to expand upon this concept to provide our guests the opportunity to get up close and personal with renowned experts within the winemaking industry,” said Mark Kansley, senior vice president of Hotel Operations for Norwegian Cruise Line.

At The Cellars, guests can participate in interactive, fun and educational wine activities including seminars, tastings, pairings and workshops. The Cellars opened aboard Norwegian Dawn in 2016 after a major refurbishment.

Guests aboard these select sailings will be able to engage with the winemakers and experts, and attend enrichment seminars and activities. On the second day of each of the wine cruises, guests will have the opportunity for an open question and answer session, held in the ship’s Atrium.

After the Q&A, guests can purchase featured wines selected by the winemakers and varietals from the ship’s wine list, meet the expert and have him sign the bottle to take home as a memento. The open forum and personal meet and greet are complimentary and open to all guests.

READ ABOUT How to Pack for a Norwegian Cruise Line Cruise

There’s a fee-based wine tasting and educational seminar hosted by the vintner in The Cellars. Guests will get a “tour” of the winemaking world and the elements that complement it. The tastings will feature specially selected wines hand-picked by the expert and brought on board for the seminar. Cost for the tastings is $19.95 per person.

Also for a fee, guests can purchase a place at the private wine dinner.  Hosted by the winemaker or the wine expert, the five-course dinner is paired with the appropriate wine for each course.  The cost is $59.95 per person.  Reservations are only available onboard the ship.

Bill Whiting, Director of Wine Education at Banfi Vintners. Grandson of John F. Mariani Sr. and founder of Banfi Vintners, Whiting carries on the tradition of Castello Banfi estate, founded in 1919 in the Brunello region of Tuscany.

Aarón Sánchez, TV Chef and James Beard award winner, he is the official ambassador and spokesperson for Terrazas de los Andes wines and considered one of the world’s leading contemporary Latin chefs.

Gerard Bertrand is the renowned vintner of Languedoc-Roussillon. Bertrand, a legendary expert in the winemaking industry, boasts 20 years of experience and has won dozens of awards and accolades.

Salvatore Ferragamo, heir of famed Italian fashion house and owner of Il Borro Winery in Tuscany, Italy. Salvatore, whose father bought the sprawling Il Borro Esatate in 1993, has replanted the family’s vineyard and has producing Tuscan wines since 1999. 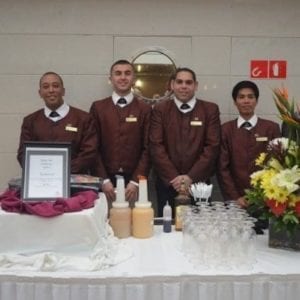