It was a big day in Bremerhaven, Germany when Norwegian Cruise Line took delivery of the 168,028-gross-ton Norwegian Bliss from Meyer Werft shipyard.

In attendance for the hand-over ceremony were, of course, Norwegian Cruise Line execs, that included Andy Stuart and Captain of Norwegian Bliss, Karl Staffan Bengtsson.

On April 21, Norwegian Bliss will depart from Southampton, England for a transatlantic crossing to New York.  To celebrate the ship’s arrival on May 3, the Norwegian Bliss “official” U.S. inaugural tour begins.

The festivities for her U.S inaugural tours commences with two-night preview events in New York, Miami, and Los Angeles.  It concludes with a grand christening ceremony and sailing from her first homeport at Pier 66 in Seattle, Washington on May 30.

Following a three-day inaugural voyage with a call into the port of Victoria, British Columbia, she will return on June 2 and will then embark on her first seven-day voyage to Alaska.

Norwegian Bliss is the third ship in the line’s Breakaway Plus class and the first cruise ship specifically designed for an Alaska cruising experience.

On board, there are some new first-at-sea features. Norwegian Bliss has with the largest competitive race track at sea, a first for any North America-based cruise ship. The two-level electric-car race track sits at the top of deck 19, offering guests amazing views while twisting and turning at a speed of up to 30 miles per hour.

Guests can also test their their skills at the outdoor laser tag course, or experienc the Aqua Racer waterslide at the Aqua Park, and its two multi-story waterslides.

New restaurants include Texas smokehouse – Q, the cruise line’s first full-service Starbucks® store at sea, and Coco’s – a chocolate and sweet treats shop.  At The District Brew House, guests can enjoy a variety of craft cocktails and beers, including local Seattle favorites from Red Hook Brewery.

Read Next:  How to Pack for a Norwegian Cruise Line Cruise

Norwegian Bliss also features a new theatrical cocktail hour experience, Happy Hour Prohibition – The Musical that will transport guests to a New Orleans speakeasy on the eve of the Prohibition era.

At The Cavern Club, guests can enjoy their favorite songs from The Beatles live with a talented cover band, in a setting inspired by the Liverpool Club where The Beatles famously performed countless times.

In winter of 2018, she will sail the Caribbean from Miami, and in the 2019 fall/winter season she will cruise from New York City to Florida, the Bahamas and Caribbean. 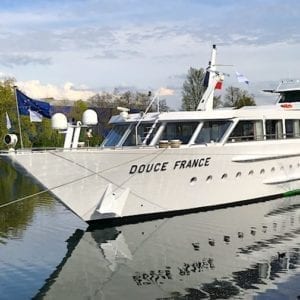