It’s a big deal when the first steel is cut for construction of a new ship.  So was the case this week at the ceremonious steel cutting event for the Nieuw Statendam.

Nieuw Statendam will be the second of Holland America’s new Pinnacle Class of ships, preceded by the Koningsdam in April of this year. Delivery of this new ship is scheduled for November 2018.

The ceremony took place at Fincantieri’s shipyard in Palermo, Sicily.  The block of the ship being built there will later be moved to the Marghera yard where the ship will actually be constructed.  When complete, the 99,500-tom ship will accommodate up to 2,650 guests.

Nieuw Statendam will be the 15th ship in the fleet. The steel cutting follows a period of design and development for the ship that features enhanced Pinnacle Class amenities and innovations.

“This is an exciting time for Holland America Line, and Nieuw Statendam’s steel cutting is a milestone that signifies our continued growth and evolution as a company and a brand,” said Orlando Ashford, Holland America Line’s president. “With Pinnacle Class we have been able to try new things, expand our horizons and push boundaries, and while Nieuw Statendam is a sister to Koningsdam, we do have some new ideas that will be revealed in time.”

As on the Koningsdam, the Nieuw Statendam will feature many of the same innovative partnerships with outside cultural icons. Among the noted partner venues are Food & Wine magazine’s Culinary Arts Center, Explorations Café, powered by The New York Times and Digital Workshop powered by Windows. Evening entertainment includes Lincoln Center Stage, Billboard Onboard and B.B. King’s Blues Club.
Photos: Holland America 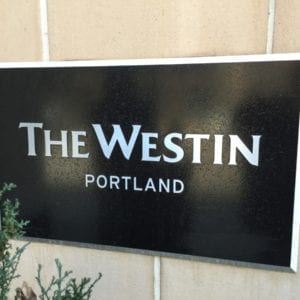 A Night at Westin Portland, Oregon Before a Columbia River Cruise