Holland America’s newest ship, Rotterdam held the naming ceremony in the ship’s namesake city, Rotterdam, The Netherlands.  Following tradition, godmother to Rotterdam was none other than Her Royal Highness Princess Margriet of the Netherlands.

Upon arrival, Princess Margriet was welcomed at the gangway with a white floral bouquet presented by seven-year-old Nora van Dijk, daughter of Nathalie van Dijk, who has been with Holland America Line for 15 years.

“Our heritage is rooted here in the Netherlands, and we are deeply honored to have Her Royal Highness Princess Margriet as godmother of her fifth Holland America Line ship,” said Gus Antorcha, president of Holland America Line. “When Rotterdam was delivered in 2021 we postponed its naming ceremony so we could hold it in Rotterdam, because there’s no better place to name a ship than in the city it was named after. After a challenging couple of years, we are excited to celebrate this memorable moment in our company’s history.”

Following the ceremony, a gala luncheon was held onboard for invited guests. The festivities continued into the evening with a gala dinner and the opportunity for guests to pour champagne over the ship’s bell. The blessing of the ship’s bell is a Holland America Line tradition when welcoming a new ship to the fleet.

What is a Holland America Royal Naming Ceremony?

Holland America Line’s connection to The House of Orange goes back nearly a century to Prince Hendrik.  He launched Statendam III in 1929. Since then, it’s become tradition for members of the Dutch Royal Family and they’ve launched 11 additional Holland America Line vessels throughout the years. Her Royal Highness Princess Margriet also named Prinsendam (1972), Nieuw Amsterdam II (1983), Rotterdam VI (1997) and Oosterdam (2003).

Additional members of the Dutch Royal Family who are godmothers include Queen Máxima, who named Koningsdam in 2016 and Nieuw Amsterdam in 2010. Then-Queen Beatrix served as Eurodam’s godmother in 2008. Rotterdam V was launched in 1958 by Queen Juliana. Then-Princess Beatrix named Statendam IV in 1957 and Prinses Margriet in 1960. Nieuw Amsterdam II was launched by Queen Wilhelmina in 1937.

The third vessel in the Pinnacle Class series and the seventh ship to bear the name for Holland America Line, Rotterdam accommodates up to 2,668 guests and features many of the popular venues introduced with her sister ships.

Throughout the ship, Rotterdam showcases Holland America Line hallmarks that drive one of the highest guest repeat rates in the industry: exquisite cuisine guided by seven of the world’s leading chefs; gracious, award-winning service; and superbly appointed staterooms and suites, including family and single accommodations.

Following the cruise, the ship will move to homeport out of Amsterdam for seven- and 14-day Norway cruises, as well as explorations to Scandinavia, Iceland and the Northern Isles. 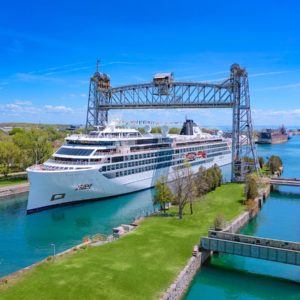