There’s a new brand ambassador in town and his name is Seth Wayne.  Joining the ranks of Carnival Cruise Lines, Holland America now also has their own engaging and entertaining spokesperson.

Seth Wayne will be wearing quite a few hats at the premium cruise line.   Officially, he’ll be known as Director, Communications and Content.  In reality, he will serve as their roving reporter, part of the cruise line’s new “HAL Aboard” initiative; a multimedia line-up of “behind-the-scenes” stories and brand highlights.

He will also be the company’s chief story-teller, sharing his fun and captivating moments through social media and other brand channels.  Hopping ships throughout the fleet and across the globe, Wayne will share onboard and shoreside stories of guests and crew on social media.

“The way we connect with our fans is evolving, and as we looked for new, compelling ways to tell our story we realized that we needed to create a role that didn’t exist in our industry,” said Orlando Ashford, president of Holland America Line. “We’re thrilled to have a dynamic and passionate talent like Seth to help develop and host our new concept, which will give us a richer and more personal dialogue with consumers and travel advisors. With our headquarters in Seattle, Seth has been a friend of Holland America Line for years. We’re proud to now call him a member of our family.”

Wayne isn’t new to being in the public eye.  He comes from Seattle’s local ABC affiliate, KOMO-TV where he was known for his entertaining personality and love for cruising. Wayne wasn’t only a weatherman, he also was the travel reporter for “Seattle Refined,” a local lifestyle show on the same network.  He produced and hosted “Adventures Await” on KOMO-AM featuring travel destinations and deals, with a focus on cruising.

“There’s no doubt that people are looking for more in-depth and engaging content as part of their travel research, especially ‘behind-the-scenes’ information and advice directly from fellow explorers,” said Wayne. “I am beyond excited to have the opportunity to bring these stories to life for Holland America Line and to say this new role as brand ambassador is a perfect fit would be an understatement. There are millions of stories to be told — and together we’re going to hop on a wave like never before.”

Holland America’s new Brand Ambassador has been in the travel industry since 2003 as a travel and cruise consultant.  His first cruise was when he was seven years old (I was eight years old on my first cruise, lol) and he’s been on close to 100 cruises. 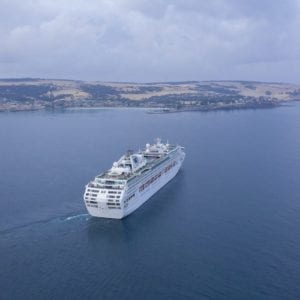