On each Food & Beverage Aficionado Cruise, you can attend your choice of cooking or cocktail demonstrations.  There are meet and greet opportunities to chat and take photos with the chefs and experts.  Reservations are a good idea if you’d like to attend the highlight of each culinary cruise; a  small-group dinner in the Pinnacle Grill with members of the Culinary Council.

Here’s the list of 2019 of Food & Beverage Aficionado Cruises with each Culinary Council and Master Mixologist.

Sodamin was born in Austria and trained in France. Rudi began his culinary career at sea as a 22-year old sous chef aboard the Vistafjord.  Within one year, he became the youngest executive chef at sea.  Sodamin also authored an interesting coffee table book called, “Food Faces” that showcases images of over 150 quirky and whimsical edible creations.

Burke is a restaurateur, cookbook author, inventor and consultant at ESquared Hospitality, that owns and operates the BLT restaurant brand.  Burke was featured on “Iron Chef America” and “Top Chef Masters.”  He is a graduate from the Culinary Institute of America.

Andy Matsuda is an innovator of sushi trends and techniques. At Matsuda’s Sushi Chef Institute in Los Angeles, California, he teaches aspiring chefs and professionals about sushi and Japanese cuisine.

DeGroff received the James Beard Award for Wine & Spirits and was inducted into the James Beard Who’s Who of Food and Beverage in America in 2015.  He is the author of “The Essential Cocktail” and “The Craft of the Cocktail.”

If you would like to make reservations for the Culinary Council specialty dinner in Pinnacle Grill, when you have your reservation contact Holland America Line’s Ship Services Department as soon as possible to secure their spot.  There is a separate fee for this event.

Holland America is still planning their wine cruises for 2019.  I’ll post the list as soon as it’s available. 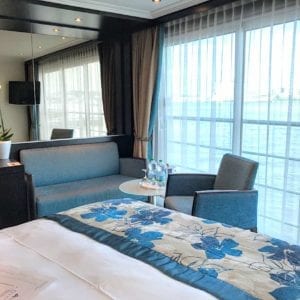