Another week has come and gone and once again, repercussions from the pandemic are still center stage.  But there are some brighter highlights that happened as well.

Last Sunday, MSC Grandiosa departed from Italy on the first cruise by a major cruise line since the pandemic began.  Only Europeans from the 26 Schengen countries were allowed to book a reservation.

MSC Cruises seemed to go to great lengths to develop their own set of onboard health protocols as well as restrictions when going ashore.  Onboard, passengers would be tested daily and have their temperatures taken at embarkation.

When going ashore, the only way to leave the ship is with the ship’s shore excursion.  No wandering around the port on your own would be allowed. Face masks must be worn whenever social distancing was not possible.

As it so happened, while at the port of Naples, a family decided to split from the required ship-sponsored shore excursion.  When they returned to the ship after meandering through Naples on their own, they were not allowed to board.

The family not only endangered residents of Naples but could possibly have been exposed to the virus while ashore and brought it onboard.  They were offered the opportunity to rejoin the ship after a designated quarantine and retaking the COVID-19 test.

On August 29, MSC Magnifica is scheduled to depart from Italy on its first cruise in five months.

Crew tests come back all negative; ship can resume service

After a week of suspended service, the Alaska Ferry MV Matanuska is scheduled to depart on time from Bellingham, Washington on Friday, August 21, 2020.  What could have been a really awful situation was averted when all crew members tested negative.

A family boarded the Matanuska in Kake, Alaska and left the ferry in Juneau 11 hours later.  Upon receiving their test results, it was learned that one or more in their group had a positive result.

Because of this, when the ship reached its destination in Bellingham, Washington, the remaining passengers left the ship but the crew was quarantined on board.  The good news arrived mid-week when all of the crew’s tests returned with negative results.

Australia removes some of the blame from Princess Cruises

According to an article in Cruise Critic, Australia has, for the most part, cleared Princess Cruises in their handling of the outbreak aboard Ruby Princess in March.

The report cited that the New South Wales Health Department made several “serious mistakes” including how they handled COVID-19 testing and isolating cruise passengers who were sick.

Of the 2,700 passengers who disembarked in Sydney, 100 of them were symptomatic.  In total, 875 infected passengers and crew were allowed to leave the ship to head home.

The report acknowledged that the officers and medical staff aboard Ruby Princess honestly answered all questions during the investigation.  However, the entire situation and how it unfolded is complicated.  While the Australian report held Princess Cruises and Carnival Australia accountable for some issues, the investigation is still in progress.

This all came to public light two days after the cyber attack when, on August 17, Carnival Corporation was required to file a form with the Securities and Exchange Commission, to notify investors that a major event had occurred.

Carnival Corp is bracing for lawsuits.  According to a statement from Carnival,  “…We expect that the security event included unauthorized access to personal data of guests and employees, which may result in potential claims.”

The investigation into the hacking is ongoing.

Seeing as how Grand Cayman has not had one COVID-19 case since July 13, the popular western Caribbean cruise port will remain closed to cruise ships.

The cruise port’s shut-down began back in mid-March and has no end in sight.  In addition, the island’s two international airports have been closed to all international travel flights since May 7 and remain closed until at least August 31st.

That’s it for this week.  Have a great weekend! 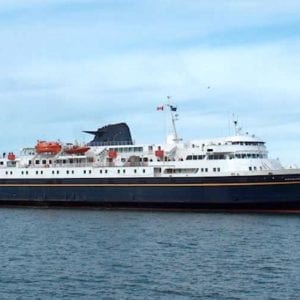